The Canberra Raiders entered the NRL/NSWRL competition in 1982 with their distinctive lime green jersey. In that year, the Raiders and the Illawarra Steelers became the first expansion clubs to be admitted from outside Sydney.

Within five years the club reached its first grand final, going down to Manly in the 1987 decider. The Raiders then enjoyed a golden period in the late 1980s and early 1990s when they won their only three premierships to date. A number of legends played for the club during that era. Not surprisingly, players from those premiership winning teams feature heavily in my all-time greatest XIII.

In the end, I’ve chosen players who I think served the Raiders well over a long period. The stats I’ve listed for each player only reflect their matches for the Canberra Raiders, not for other clubs or representative teams.

A brilliant attacking fullback, who was also safe under the high ball, Belcher joined the Raiders in 1986 from Souths in Brisbane, alongside Mal Meninga. The gun duo had won the BRL premiership in 1985, upsetting a star-studded Wynnum-Manly line up that was captained by Wally Lewis. Belcher made an instant impact in the NSWRL, winning the Raiders’ Player of the Year award in his first two seasons with the club. His form with Canberra was good enough to earn him a State of Origin debut in 1986 and he went on to forge a successful representative career with Queensland and Australia. ‘Badge’ was central to the Raiders’ emergence as a super power, playing a pivotal role in Canberra’s 1989 and 1990 premiership-winning teams.

Equally at home at fullback or on the wing, Brett Mullins had electrifying pace. Coupled with his long stride, he was a great sight in full flight and scored some amazing tries. After starting his career on the wing, Mullins took over the Raiders’ fullback spot when Gary Belcher retired and he played an important role in their 1994 premiership win. Brett followed in the footsteps of his father Bill Mullins, who was named as a winger in our Greatest Sydney Roosters XIII. Both scored more than 100 tries during their illustrious careers.

After joining the Raiders with Gary Belcher in 1986, Mal Meninga overcame several broken arms before captaining the club to all three of their premiership wins in 1989, 1990 and 1994. Undoubtedly one of the greatest centres the game has seen, Meninga’s sheer size and strength made him a nightmare for opposing players to mark. ‘Big Mal’ had the perfect finish to his Raiders career in the 1994 grand final, intercepting a pass in the dying minutes to score the last try in Canberra’s 36-12 win over Canterbury. In 2008, the legendary Meninga was named in the Queensland and Australian Teams of the Century.

Ruben Wiki started his career as a centre and, at just 21, partnered Mal Meninga in the Raiders’ 1994 premiership win. Although he moved to the forwards later in his career, I’ve chosen him as a centre to fit some other Canberra greats into the all-time greatest pack. Wiki’s outstanding form with Canberra saw him go on to become New Zealand’s most capped Test player – and many consider him one of the Kiwi’s best ever. After twelve excellent seasons with the Raiders, he returned to his homeland to finish his career with the Warriors.

‘Chicka’ Ferguson was a crowd favourite and he was the competition’s leading try scorer in 1988. But he’s best remembered for a crucial try he scored when all seemed lost for the Raiders in the dying minutes of the 1989 grand final. That try and Meninga’s conversion sent the match into extra time and the rest is history. Five-eighth Chris O’Sullivan kicked a field goal and replacement forward Steve Jackson scored a memorable try for the Raiders to win their first premiership. Ferguson also played in the Raiders’ 1990 grand final win before retiring at the age of 36. He still had fast feet and pace, even then!

Laurie Daley made his first grade debut as a centre for the Raiders at just 18 and within two years he was playing State of Origin for New South Wales. He was a key member of Canberra’s three premiership winning teams. When Chris O’Sullivan left to play in England after the Raiders’ 1990 grand final win, Daley made the Canberra five-eighth spot his own for the next ten seasons, forming one of rugby league’s greatest halves combinations with Ricky Stuart. Daley was a supreme attacking player, who knew when to run and when to use the talented backs outside him in the strong Canberra teams of the early 1990s. He won the Dally M Player of the Year Medal in 1995 and was named Super League’s Player of the Year in 1997. Daley captained club, state and country during his wonderful career and retired as one of the game’s greatest five-eighths.

Ricky Stuart was a ferocious competitor as a player, just as he is now as a coach. Precise, long, spiralling passes in both directions were a feature of his game, invariably hitting his outside men on the chest when they were at full pace. His kicking game was also sublime. Stuart played in all three of the Raiders’ premiership-winning teams, and captured the Clive Churchill Medal in their 1990 grand final win against Penrith. He was at his peak in 1993, when he won both the Dally M and Rothmans Medal, solidifying his place among rugby league’s finest halfbacks.

Glenn Lazarus (a.k.a. ‘The Brick with Eyes’) started his career with Canberra and played a crucial role in their 1989 and 1990 premiership-winning teams. The seemingly endless metres he gained in the middle of the ruck helped to lay the platform for Canberra’s incredible backline to weave their magic. Lazarus’s stellar form with the Raiders earned him regular State of Origin and Test selection. The brilliant prop forward eventually became a victim of Canberra’s success, as the club struggled to keep their star-studded line-up under the salary cap, and he accepted a lucrative offer to join the Broncos.

Another Queenslander, Steve Walters was a talented and durable hooker who had a fierce rivalry at club and representative level with Benny Elias from the Balmain Tigers. The older brother of twin Broncos’ legends Kevin and Kerrod, Steve was a great dummy-half runner and solid in defence. ‘Boxhead’ wore the number 9 jersey for all three Canberra’s premiership winning teams in 1989, 1990 and 1994. In 1993, he was named as Rugby League Week’s Player of the Year and he had a long State of Origin and Test career.

Brent Todd was already a New Zealand Test representative when he became an important signing for the Raiders’ forward pack in 1987. He player in four grand finals during his stint with the club, winning two. He certainly wasn’t a flashy player, never scoring a try in the lime green jersey. That’s five nudie runs in his five seasons with the club! But he didn’t need to score points, Canberra had plenty of players who could score tries in his era. Instead, Todd was rock solid and dependable in the middle of the ruck. He continued to be a mainstay of the New Zealand Test team during his time at Canberra.

Jason Croker holds the record for the most first grade games and the most tries for the Canberra Raiders. He played for the club for sixteen seasons and was a part of the forward pack in the 1994 premiership-winning team, scoring a try in the grand final. Croker had great strength, which he used effectively to either to shrug off defenders or stand in tackles to offload. He was also extremely versatile, playing in a number of positions in both the forwards and the backs during his career.

David Furner was a workhorse second-rower in both attack and defence and also a great goal-kicker. At the time of his retirement, he was the highest point-scoring forward in NRL history. Furner won the Clive Churchill Medal in the Raiders’ 1994 grand final win, scoring a try in that match, and was also a wonderful servant for New South Wales in the latter part of the 1990s.

Bradley Clyde was a tireless and dynamic backrower, who set the standard for lock forwards in his era. At just 19, Clyde won the Clive Churchill Medal in the Raiders’ 1989 grand final win and became Canberra’s first home-grown international. Two years later, he collected the Clive Churchill Medal again in the 1991 grand final loss to the Panthers, becoming the first (and still only) player to claim the prestigious award twice. Clyde tasted premiership success again in 1994 and was also a crucial weapon for the dominant New South Wales sides of the era. He is often cited as one of the game’s greatest lock forwards and among the best footballers of the 1990s. 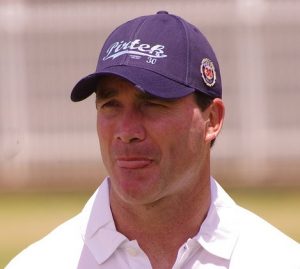