Long-time rugby league fans generally either love or hate the Manly Sea Eagles. The Northern Beaches club entered the NSWRL/NRL in 1947 and have since won eight premierships. They secured their first four titles during a dominant era in the 1970s when they were famously dubbed ‘The Silvertails.’ Interestingly, the Sea Eagles have never won the wooden spoon.

Manly went through three seasons of turmoil between 2000 and 2002 when the club was part of an ill-fated merger with the North Sydney Bears, historically one of their bitter rivals. Games played and points scored by Manly players for the merged Northern Eagles are counted separately in official rugby league records. That means Steve Menzies is not the leading all-time try scorer for Manly (Brett Stewart, technically, has that mantle), nor has he played the most games (instead, that record is held by Cliff Lyons).

Coming up with the Sea Eagles’ all-time greatest XIII invariably means some tough decisions have to be made. I have left out some absolute legends like backs Graham Eadie, Dale Shearer, John McDonald, Ken Irvine, Alan Thompson and Des Hasler. In the case of Ken Irvine, the all-time leading try scorer in NRL history, he played the majority of his career with North Sydney. He would be the first player picked for their all-time greatest XIII.

In the forwards, Paul Vautin, Noel Cleal, Anthony Watmough, Bill Hamilton, Fred Jones and John O’Neill could all count themselves unlucky to miss out. In the case of O’Neill, he played the majority of his career at Souths, and he was named in our Rabbitohs’ all-time greatest XIII.

In the end, I think that the players I’ve selected had greater success over a longer period of time with Manly. The stats I’ve listed for each player reflect only their matches for Manly or the Northern Eagles, not for any other club or representative team.

It had to take someone special to knock Graham Eadie out of this spot. Known variously as the ‘Prince’ or the ‘Barron’ of Brookvale, Brett Stewart is sixth on the list of all-time try scorers in Australian rugby league history. His electrifying speed and anticipation to bob up in the right place at the right time made him a nightmare for opposition defences. Stewart was a key player for Manly during a strong era for the club where they made the finals every year for a decade and won two premierships, in 2008 and 2011.

Ray Branighan played mainly as a centre at Manly, but it’s only on the wing that I can find a spot for him in this all-star line-up. He was a winger in his early career with Souths prior to becoming a prized signing for the Sea Eagles. Branighan was already an international by that stage, but his representative career continued for another four seasons with Manly. He helped the club win their first two premierships in his first two seasons, scoring 15 of his team’s 19 points in their breakthrough grand final victory over Eastern Suburbs in 1972.

After starting his career at Parramatta and then having a successful stint in England, Jamie Lyon made Brookvale his home for ten seasons. ‘Killer’ was another key player in a very successful era for the club, winning two premierships and captaining the team in their 2011 grand final win over the Warriors. Although he played plenty of representative football, Lyon would have secured many more State of Origin and Test appearances if he had made himself available for selection.

Bob Fulton was one of the original four ‘Immortals’ chosen by Rugby League Week when they came up with the concept, so his selection is a ‘no-brainer.’ A brilliant attacking player, he won three premierships with the Sea Eagles in the 1970s. In the brutal 1973 decider against Cronulla, Fulton was the difference between the two sides, scoring Manly’s only two tries. ‘Bozo’ also captained the team in their 1976 grand final win over Parramatta and had a glittering representative career.

A dual rugby league/rugby union international, Michael O’Connor found his way to Manly via St George. He played mainly in the centres, but to squeeze him into this all-time greatest team I’ve taken into account his performances as a Wallaby and Kangaroos winger. O’Connor created countless tries with his brilliant footwork and was also a handy goalkicker. In the Sea Eagles’ 1987 grand final win over Canberra, he scored 14 of his team’s 18 points with a try and five goals.

After starting his career at North Sydney, Cliff Lyons became an ageless and skilful five-eighth for Manly over fourteen seasons. He consistently mesmerised defences and set up his outside men with uncanny ball work. The brilliant indigenous playmaker won two premierships with Sea Eagles, and was named the Clive Churchill Medallist in their victory in the 1987 decider. Lyons also won two Dally M Player of the Year awards during his career (1990 and 1994).

The diminutive Geoff Toovey is undoubtedly one of the toughest rugby league players of all time. Few who witnessed Adam MacDougall stomp on his face in the 1997 grand final loss against Newcastle will forget Toovey’s astonishing courage. The elusive halfback also had plenty of skill and developed a wonderful halves combination with five-eighth Lyons throughout the 1990s. Toovey captained the Sea Eagles to three consecutive grand finals (1995-1997), including their victory over St George in the 1996 decider. He also had successful State of Origin and Test careers, showing his versatility by often playing at hooker in those matches.

Roy Bull made his debut as a 17-year-old in Manly’s inaugural season in 1947. He quickly established himself as a great scrummager and workhorse around the ruck, becoming the Sea Eagles’ first ever representative player when selected for New South Wales and Australia in 1949. Bull dominated in the forwards like few before him and is considered by some as among the greatest props in rugby league history. Sadly, Bull never won a premiership with the Sea Eagles, losing three grand finals in the 1950s. The club’s annual first grade Best and Fairest award is named in his honour.

Not counted in Krilich’s match tally above are the more than 100 games that he played in reserve grade for Manly as a young player behind the incumbent Test hooker Fred Jones. Krilich eventually got his chance in first grade in 1974 and stayed there for the next ten seasons, winning two titles. He captained the team in their 1978 premiership victory over Cronulla, which was eventually won when the match was replayed after the original grand final finished in an 11-all draw. Krilich also captained the famous 1982 Kangaroos (‘The Invincibles’) on their unbeaten tour of Great Britain and France. 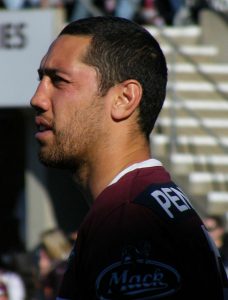 Front rower Brent Kite helped Manly to premierships in 2008 and 2011.

After starting his career at St George, Brent Kite became an integral member of Manly’s forward pack in their recent successful era, winning two premierships with the club. He was awarded the Clive Churchill Medal for his performance in the Sea Eagles’ 40-0 rout of Melbourne in the 2008 grand final. Kite was also a mainstay of New South Wales and Australian teams in his prime.

The revered Terry Randall was a fearsome defender, who played in four premiership-winning teams with the Sea Eagles during the 1970s. ‘Igor’ was renowned for the sting in his defence and his overall toughness in what was a very physical era of rugby league. An extremely versatile footballer, Randall covered centre, second row, lock and prop during his career. He was rewarded for his consistency at the Sea Eagles with multiple New South Wales and Australian jerseys, including selection in the 1975 and ’77 World Cup squads.

Steve Menzies is second on the list of try scorers in Australian rugby league history with an incredible 180. A long striding backrower with exceptional pace, he formed a great partnership running off Cliff Lyons early in his career. ‘Beaver’ was also a strong defender with wonderful timing and a tireless worker. He played in two Manly premiership-winning teams – twelve years apart – and fittingly scored a try in both deciders. Menzies forged an extensive representative career with New South Wales and Australia and retired, arguably, among rugby league’s greatest second-rowers.

Mal Reilly was already a Great Britain international when he joined Manly at the age of 23 and he made immediate impact. Reilly helped the club to their first two premiership wins in 1972 and ’73. A noted hard man, he was targeted as a key player by Cronulla in the infamous 1973 decider, being taken out early and injured off the ball. Knowing he wouldn’t see out the match, Reilly was given pain killers as well as instructions by coach Ron Willey to do as much physical damage as he could for as long as he could last. He followed those instructions to the letter in 25 minutes of mayhem, helping the Sea Eagles secure another title. Reilly was so influential during his five seasons at Manly that he is considered by many to be the greatest ever British rugby league import.