The Sydney Roosters are one of the oldest and most successful rugby league clubs in Australian history. Known as Eastern Suburbs for the majority of their existence, they were a foundation club of the New South Wales Rugby League (NSWRL) when it formed in 1908.

The tri-colours have have won 13 NSWRL/NRL premierships in their history, placing them behind only the South Sydney Rabbitohs (21) and St George-Illawarra Dragons (15).

They have had some brilliant players over the years; some that I have really struggled to leave out.

Players like the legendary 1930s halves pairing of Ernie Norman and Viv Thicknesse, who won three consecutive premierships in a great era for the club – the Roosters lost just one match during those three seasons! Lock Andy Norval is another from that era who has a strong case for inclusion, though I have included three of their teammates.

There are also legends from the club’s champion 1974 and 1975 premiership teams like fullback Russell Fairfax, winger Ian Schubert, centre and dual international John Brass, as well as noted defender Barry “Bunny” Reilly (second row). You could mount a great argument to include any of those players, along with their four teammates that I have actually chosen.

I also couldn’t find a spot for more recent club great Luke Ricketson, who was a key member of the dominant sides from the early 2000s.

None of the players I’ve mentioned above would be out of place in this side. In the end, though, I think that the players I’ve chosen achieved more success for the Roosters over a longer period, or were more influential individually in the teams they played in.

The stats I’ve listed for each player only include their performances for the Roosters, not for any other clubs or in rep matches.

The current record-holder for the most games and most tries for the Roosters, Anthony Minichiello was a constant threat in attack, safe under the high ball and solid in defence. In 2005, he won the Golden Boot Award, being voted as the best player in the world. ‘Mini’ won two premierships with the Roosters during his fifteen loyal seasons, including captaining the side to victory in 2013. He also showed a lot of courage in coming back from a serious back injury later in his career. 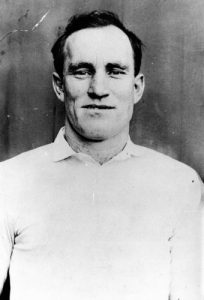 A century on, Dally Messenger remains among the Roosters greatest players

Dally Messenger was a rugby union international and one of Easts’ key signings for their debut season in 1908. He helped rugby league gain publicity in Australia in the early years. Messenger won three premierships with the Roosters, was the season’s leading point-scorer on three occasions, and was the inaugural captain of the Australian Rugby League Test team. The Dally M Medal that is awarded to the best player in the National Rugby League today is named in his honour.

Dave Brown broke so many records during his career that he became known as “the Bradman of league”. Some of those records still stand today, like the 38 tries he scored in the 1935 season, as well as the 45 points he scored in the first match of that same year against Canterbury. Those 45 points included 15 goals (another record that hasn’t been broken) and five tries (which were worth three points then – so it would actually be 50 points for the match using today’s four point value for a try!).

Brown was the lynchpin in one of rugby league’s all-time greatest backlines. His phenomenal strike rate of 93 tries in 94 matches for the Roosters shows just how dangerous he was. He won two premierships with Eastern Suburbs and captained Australia in Test matches during his career at the club. 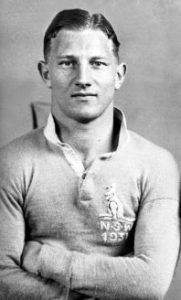 1970s flyer Mark Harris was an unusually big centre for his era, and he used that size to full effect, especially in attack. He played in the Roosters’ legendary 1974/75 grand final-winning teams, and represented Australia at two World Cups.

Harris was also a gridiron trailblazer long before Jarryd Hayne was even born. He unsuccessfully trialled for the Philadelphia Eagles in the NFL in 1973, but was picked up by a Canadian team and played several matches in their league during one season before returning to the Roosters.

Even though modern-day wingers tend to be big and fast like Bill Mullins was, most opponents in his era were much smaller. Mullins used his remarkable athleticism to become the first Roosters’ player to score 100 career tries. He played in the Roosters’ 1974 and 1975 premiership teams, scoring a try in the ’74 decider against Canterbury. His son Brett Mullins later had his own successful career at Canberra and the Roosters, winning premierships with both clubs.

After starting his career at Penrith in the late 1980s, Brad ‘Freddy’ Fittler joined the Roosters as a marquee signing in 1996. He quickly showed his class and won the Rothman’s Medal (the equivalent of today’s Dally M Medal for the best player in the competition) in 1997. Fittler had one of the best steps in the game, which, combined with his size, made him a major attacking threat. He captained the Roosters to a premiership in 2002, steered New South Wales to several State of Origin series wins and led Australia to a World Cup victory during his time at the club. His influence was such that he is widely considered among the best five-eighths of all-time.

Kevin “Horrie” Hastings was the heart and soul of the Eastern Suburbs Roosters during the late 1970s and early 1980s. A brilliant organiser and very physically fit, he was the first player to reach 200 first grade games for the club. He won the Rothman’s Medal in 1981 and was voted the Rugby League Week Player of the Year in 1980, 1981 and 1982. The Kevin Hastings Stand at the Sydney Football Stadium is named in his honour.

Ray Stehr was a tough prop who overcame a spinal issue as a child to make his first grade debut for the Roosters at just 16! He was part of a dominant Roosters’ forward pack during their golden era in the 1930s when they went through three seasons losing just one match. Stehr won five premierships with the club, captaining the team in their 1940 and 1945 grand final wins, and is considered one of rugby league’s greatest ever front rowers. 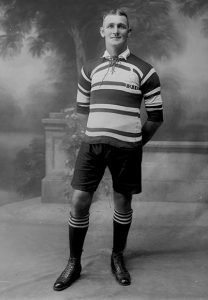 Sandy Pearce was the Roosters’ inaugural hooker, winning three premierships with the club as they established themselves as a force in the early years of Australian rugby league. He was the first player to reach the 100 game milestone for the tri-colours, as well as the first in Australian rugby league history to notch up 150 top grade games. He also represented New South Wales and Australia for most of his career.

Arthur Beetson was named as the seventh rugby league immortal in 2004. He had brilliant ball skills and his ability to offload, despite the attention of several defenders, became legendary. ‘Big Artie’ also had good speed for a man of his size and was a strong, tough defender. He captained the Roosters’ premiership-winning teams in 1974 and 1975 and was named the Rugby League Week Player of the Year in 1974. While at the Roosters, he also became the first Indigenous player to captain Australia.

Joe Pearce was another member of the Roosters’ dominant forward pack in their golden era during the mid 1930s. Noted for his ball-playing ability, Pearce won four premierships with Eastern Suburbs and is considered by many to be one of the greatest second-rowers of all-time. He was also the son of the Roosters’ legendary hooker Sandy Pearce. They became the first father and son in rugby league history to be selected to represent Australia during their respective careers.

There have been a lot more flashy players than Craig Fitzgibbon for the Roosters over the years, but few who were able to do their job so effectively in both attack and defence. Extremely physically fit, Fitzgibbon had a phenomenal workrate and was also a great goal-kicker. He remains second on the all-time list of point-scoring forwards in rugby league history with 1604. Fitzgibbon won the Clive Churchill Medal in the Roosters’ 2002 grand final win over the New Zealand Warriors, and had successful Origin and Test careers while at the club.

Ron Coote had already established himself as a South Sydney legend before joining the Roosters in 1972. The rangy lock was at the height of his career and continued his phenomenal success with the tricolours. He formed a great combination with Artie Beetson, with the sight of Coote running off a Beetson pass becoming as well known as his brilliant cover defence. Coote was a key member of both the 1974 and 1975 Roosters’ premiership teams, and continued to play for Australia for several years after joining the club.

So that’s my opinion for the Sydney Roosters’ all-time greatest 13. What are your thoughts and how do you think the Roosters’ greats would stack up against South Sydney’s greatest line-up?