The Penrith Panthers recently celebrated their 50th season in the NSWRL/NRL competition. During that time, some of rugby league’s most brilliant players have donned the Panthers jersey.

The club has won two grand finals, in 1991 and 2003. Not surprisingly, many players who starred in those premiership-winning teams are featured in my all-time greatest XIII, though there are still some very notable omissions. Craig Gower and Grahame Moran are two Penrith hall-of-famers who could count themselves very unlucky to miss out. I also couldn’t squeeze in title-winning forwards Luke Priddis, Colin van der Voort, Trent Waterhouse and Joel Clinton, nor electrifying backs Michael Jennings, Brad Izzard, Preston Campbell, Luke Rooney and Graham Mackay. Legendary prop Petero Civoniceva was another serious contender, but he only played four of his fifteen seasons in the NRL with Penrith.

In the end, I’ve chosen players who had longer careers and/or more success in the Panthers jersey. I’ve also shuffled a couple of versatile players into positions where they played less regularly over the years, just so I could fit some other greats in. The stats listed for each player only reflect their first grade appearances at Penrith, not for other clubs or representative teams.

Scintillating fullback Rhys Wesser is the greatest try scorer in Penrith Panthers history. His great speed and anticipation made him an ever present threat in attack throughout his career. In 2003, his finest season, Wesser was the NRL’s top try scorer and a key member of Penrith’s premiership-winning team. His 25 tries that year remains a season record for a fullback and helped to earn him Queensland State of Origin selection in 2004.

Although he has the prime years of his career still ahead of him, Josh Mansour already ranks among the best to have played on the wing for the Panthers. Mansour’s try-scoring strike rate is exceptional and his ability to make big metres returning kicks is a prized asset in the modern winger’s game. Mansour has already played for New South Wales and Australia and, barring injury, should continue to be a staple of representative sides for years to come.

After starting his career at Illawarra, Ryan Girdler made his name at Penrith over twelve seasons, earning numerous New South Wales and Australian jerseys during his time at the club. A sharp-shooting goalkicker, he remains the highest point scorer (1572) in Penrith history and was a vital member of the 2003 premiership-winning outfit.

‘Girds’ developed into a point-scoring wizard with the Panthers and became the first player in rugby league history to achieve the combined feat of 100 career tries and 500 career goals. He also holds the record for the most individual points in a State Of Origin match, with 32 in the Blues’ 56-16 rout of Queensland in the third game of the 2000 series.

Although he went on to become the brilliant five-eighth that we named in our Sydney Roosters’ all-time greatest XIII, Brad Fittler spent the first seven years of his career at the Panthers, playing mainly as a centre. An obvious talent from a young age, ‘Freddy’ made his first grade debut for the club while he was still in high school. In just his second season, he played in the Panthers’ first ever grand final (the 1990 loss to Canberra) and was selected for New South Wales, which was the start of his long and distinguished representative career. The following year, Fittler was part of Penrith’s first premiership-winning team, helping to prevent the star-studded Raiders from winning a hat-trick of premierships. 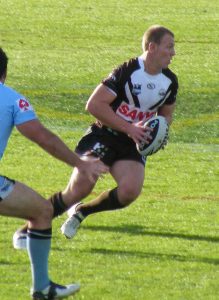 It’s hard to believe looking at him now, but Luke Lewis started his career as a skinny, 80 kilogram winger – and that’s where I’ve selected one of Penrith’s favourite sons, so that I can accommodate some other greats in the forward pack. Lewis’s ability and incredible versatility saw him become a regular representative player during his time with the Panthers. He played on the wing in their 2003 grand final win over the Roosters and was also selected for New South Wales in that position. Lewis eventually moved closer to the action, with centre and later backrow becoming his favoured roles.

A veteran of 14 seasons, Steve Carter holds the record for most first grade appearances for the Panthers. The clever five-eighth formed a great scrumbase combination with Greg Alexander early in his career and was instrumental in guiding the club to its first premiership win in 1991. Carter was a tough competitor and influential leader who went on to captain Penrith with distinction throughout the mid-to-late 1990s.

A star schoolboy player, Greg Alexander burst onto the first grade scene in 1984. In just his second season of top flight football (at 20 years of age!) he won the Dally M Player of the Year Medal. ‘Brandy’ was an agile and elusive halfback with a great kicking game and speed to burn. He also had the ability to play fullback and, in an era of great number sevens, that versatility helped to earn him State of Origin and Australian selection. His undoubted career highlight was captaining the club to its first ever premiership win in 1991. After a brief two year stint with the Warriors later in his career, he fittingly returned to Penrith for his final three seasons.

Tony Puletua started his career as a wide-running backrower but finished it as a prop, which is where I’ve chosen him in this all-time greatest line-up. Puletua was one of Penrith’s most consistent performers for over a decade and earned 22 New Zealand Test jerseys during his Panthers career. He was an important member of Penrith’s dominant 2003 forward pack and starred in their premiership charge. Puletua developed into a fine leader and captained the club later in his career.

Amazingly, two of Royce Simmons’ 15 career tries came in his last match – the 1991 grand final win over Canberra. Simmons is one of Penrith’s favourite sons and he gets the nod at hooker in a photo finish from Luke Priddis, who won the Clive Churchill Medal in the Panthers’ 2003 grand final win over the Roosters. Not a flashy player by any means, Simmons was fit, reliable, tough and durable – the essential traits for any great hooker. He holds the distinction of being the first Penrith player to represent Australia and also made 10 appearances for New South Wales during the mid-80s.

Tim Sheens was another player firmly in the tough and durable category. He made his name firstly as a backrower and later as a wily ball-playing prop. Unlike others on this list, Sheens played for Penrith at a time when the club was really struggling to establish itself as a force. He was consistently one of the Panthers’ best across his thirteen seasons and retired as the club’s most-capped player.

Mark Geyer was a fiery player whose career was erratic, to say the least – but there is no denying his impact in the early years. Geyer was instrumental in Penrith’s breakthrough 1991 premiership victory, helping to set up two of the Panthers’ three tries on grand final day. An Australian representative at his peak, ‘MG’ put genuine fear into opposition forward packs and that’s what gets him the nod for this all-time greatest team.

John Cartwright was a strong runner and skilful ball player for Penrith for twelve seasons, with his form earning him numerous New South Wales and Test jumpers. His uncanny ability to offload was his trademark. Despite an injury-plagued season in 1991, Cartwright played an important role off the bench in Penrith’s first grand final win. He was also a natural leader, captaining the club later in his career after Greg Alexander left to join the Warriors.

The son of legendary Souths prop John (a member of our Greatest South Sydney XIII), Scott Sattler was a tireless lock forward who excelled during his five seasons with the Panthers. He was a model of consistency, named as Penrith’s Player of the Year in 2001, and became a key member of one of rugby league’s most dynamic forward packs. Sattler will forever be remembered for his copybook cover defending tackle that stopped Roosters’ winger Todd Byrne from scoring at a crucial stage in the 2003 grand final. That effort was arguably the turning point in the match and, because of its significance in Penrith’s history, that tips the scales in Sattler’s favour over Colin van der Voort for the lock spot, in my opinion.