It took fifty seasons, but the Cronulla Sharks finally won their first premiership in 2016, putting an end to the ‘leaving the porch light on for Harold Holt’ jokes once and for all. That grand final win throws up some interesting challenges when selecting their all-time greatest XIII.

Plenty of great players spilt blood, sweat and tears for the Sharks for long periods before relative newcomers like James Maloney and Michael Ennis helped lead the club out of the premiership wilderness. Cronulla did have other periods of genuine success, including two unsuccessful grand final tilts in the 1970s and another in the 1997 Super League competition. They were also were minor premiers in 1988 and 1999, only to bow out in the semi-finals.

The club recently named its official Team of the Half Century. There was plenty of controversy, with many great Sharks players inevitably missing out on selection. Legends such as Jonathan Docking, Ray Corcoran, Mark McGaw, Michael Speechley, Paul Green, Barry Russell, Terry Hughes, Preston Campbell, Kurt Sorensen, Les Davidson, Ron Turner, Ken Maddison, Wade Graham and Luke Lewis were all overlooked. While they were all worthy candidates, I’ve only managed to squeeze in one of the above Sharks players into my greatest ever team.

‘The Peach’ was one of the most entertaining fullbacks of the last twenty years. His long stride and remarkable agility made him a handful for opposition defences, especially in broken play. He also wasn’t afraid to be unorthodox to create scoring opportunities anywhere on the field. Peachey produced arguably his finest season in 1999 when he broke Andrew Ettingshausen’s season try scoring record for the club and was named Dally M Fullback of the Year. He took out the Dally M positional award again in 2000 and was rewarded with State of Origin selection. Peachey scored the match winning try in his only appearance for the Blues in Game 1, with injury ruling him out of Games 2 and 3.

Only one player has scored more points for Cronulla than Mat Rogers in the club’s 50 year history – his father Steve. Mat was elusive and a great finisher, forming a great combination with David Peachey and Andrew Ettingshausen in the strong Cronulla teams of the late 1990s. His excellent goal kicking was an added bonus, and his consistent form saw him selected for both Queensland and Australia before he switched to rugby union and became a dual international.

Three decades after his retirement, Steve Rogers remains the all-time leading point scorer for the Sharks with 1,253. He made his first grade debut for the club at the age of 18 in 1973, playing in their first ever grand final that year. That was a bruising loss against Manly that is widely regarded as one of the most brutal rugby league matches of all time. Rogers won the Rothmans Medal (the equivalent of today’s Dally M Medal) in 1975, then captained the Sharks in two grand finals against Manly in 1978 (the first match was drawn and Manly won the replay a week later). ‘Sludge’ was an automatic selection for New South Wales and Australia for many years, making three Kangaroo Tours to Great Britain and France. He remains widely cited as one of the best rugby league centres of all time and is arguably at the top of the list of great Cronulla Sharks players.

Andrew Ettingshausen played for the Sharks for an incredible 18 seasons, making his first grade debut at the age of 18 while still at high school. Blessed with incredible pace, ‘ET’ was a try-scoring prodigy. He once crossed for 5 tries in a match (against Souths in 1994) and his career tally of 165 tries is still 4th on the all-time list of NRL try scorers. Ettingshausen was a dominant figure during the late 1980s and throughout the 1990s, forging an extensive and successful representative career. He captained the Sharks in their 1997 Super League grand final loss to the Broncos, but, unfortunately, premiership honours eluded him.

Edging out modern day winger Valentine Holmes (at this stage, early in his career) in my side is Ray Corcoran. He was a speedy winger of the late 1960s and early ’70s with a great try scoring strike rate. Corcoran was a key attacking weapon for the Sharks during their first period of success, playing wing in the 1973 grand final loss to Manly. He was Cronulla’s top try-scorer in 1971, ’72 and ’74 and finished his career at the apex of the club’s all-time try-scoring list.

Although 2016 was only his first season with the Sharks, many believe that James Maloney brought the experience needed to help the club win its first ever premiership. Looking at his career record, it’s easy to see why. During his time with the often underachieving New Zealand Warriors, Maloney steered the club to a grand final appearance, then he starred for the Sydney Roosters in their 2013 premiership triumph just two years later. In 2016, Maloney again produced a brilliant season to guide Cronulla to its maiden premiership. In the process, he was named Dally M Five Eighth of the Year, recalled to the New South Wales State of Origin team, and became one of a small group of players to make grand final appearances for three different clubs.

Pint-sized Englishman Tommy Bishop established the Sharks as a force in their early years. He was already a Great Britain international when he signed with the club in 1969 and he took over as captain-coach in 1970. He held that role for the next four years and guided the Sharks to their first grand final appearance in 1973. Bishop also managed to lure fellow Great Britain international Cliff Watson to Cronulla in 1971, helping the club build an elite team capable of challenging for the title.

Kiwi international Dane Sorensen gave great service to the Sharks for 12 seasons. At the time of his retirement, he held the record for most first grade appearances with the club. A tough and uncompromising prop, Sorensen starred for the Sharks in the late ’70s, but unfortunately missed the two 1978 grand finals against Manly through suspension. Dane played alongside his brother and fellow Kiwi international forward Kurt at the Sharks and the two were crowd favourites for many years. 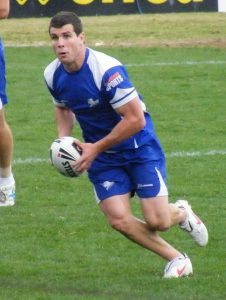 Along with James Maloney, Michael Ennis is credited with bringing the experience Cronulla needed for their 2016 premiership success. He had a shrewd football brain and the ability to get under an opponent’s skin with his niggling tactics. Although Ennis had successful individual stints at four previous clubs throughout his career (the Bulldogs, Broncos, Dragons and the Knights), he had never won a premiership prior to joining Cronulla. He achieved the fairy tale finish to his career when the Sharks eclipsed Melbourne in the 2016 grand final.

Englishman Cliff Watson was named as the starting prop in the official Sharks’ Team of the Half Century that I mentioned earlier, with Fifita on the bench. But I’ve gone for the controversial Fifita in my all-time greatest 13 instead. His comparative longevity with the club and his standout performance in the 2016 grand final (when he was under considerable off-field pressure) gives him the nod for me. His try in that match was crucial and he’s always a handful for opposition defences to handle.

A gifted ball player, Gavin Miller won the prestigious Dally M Medal in consecutive seasons at the peak of his career (1988/89) and is regarded by many as one of the best footballers of the 1980s. He was instrumental in the Sharks winning the minor premiership in 1988, being the spark for much of their attack. Miller was noted for his ability to put his fellow Sharks players into gaps, despite attracting plenty of defensive attention. He was also durable and tough, copping plenty of knocks as a fairly small (87 kilogram) forward.

Greg Pierce became the Cronulla Sharks’ first international representative in 1973; the same year he also played a crucial role in the club’s march to the grand final. He went on to lead the Sharks for six seasons, as well as captaining Australia in the Test arena. Unfortunately, along with Dane Sorenson, he missed Cronulla’s two 1978 grand finals against Manly due to suspension, after being sent off in the major semi-final. Many believe the absence of those two key forwards cost the Sharks the premiership. 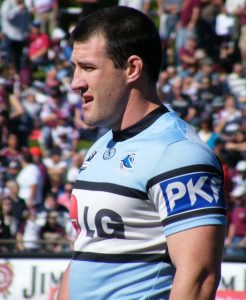 Now in his 17th season with the club, barring injury, Gallen will become the first forward to play 300 games for the Sharks. His undoubted career highlight has been lifting the Provans Summons Trophy after Cronulla’s grand final win in 2016. Gallen’s work rate, in both attack and defence, has become legendary and he has been a mainstay of the New South Wales and Australian forward packs for the majority of his career.

So those are my thoughts on the greatest Cronulla Sharks players. What are your thoughts and how do you think this team would stack up up against other all-time greatest sides that we’ve covered in our series so far?