The South Sydney Rabbitohs are the most successful club in Australian rugby league history, having won more premierships (21) than any other NRL outfit. Despite their history of success, Souths suffered a premiership drought of 43 seasons between 1971 and 2014, before Sam Burgess and Greg Inglis famously led them out of the wilderness.

The club was one of the founding members of the original New South Wales Rugby Football League that started in 1908. They have since participated continuously in the official premier rugby league competition in its various incarnations in Australia (the ARL and NRL), except for a controversial two-year period in 2000-2001 when they were excluded. That decision was subsequently overturned on appeal, after several public rallies from their legion of die-hard fans.

Because of the club’s rich history, coming up with their greatest all-time XIII is a serious challenge. Below are my selections, which are sure to trigger some debates. Those under the age of 50 wouldn’t have seen many of these Rabbitohs players live in action, but their records speak for themselves.

All of the players selected represented their state and country while playing for the Rabbitohs. Some also had successful stints at other clubs during their careers; however, the stats listed for each player reflect only their first grade matches and achievements wearing the famous red and green jersey.

So, without further adieu, let’s take a look at the greatest South Sydney Rabbitohs players of all time. 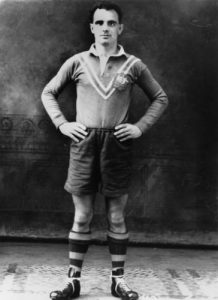 Clive Churchill remains one of rugby league’s greatest ever players

The ‘Little Master’ (as he was known) was one of the original four Immortals named by Rugby League Week when they came up with the concept, so his selection is a ‘no-brainer’. Only slightly built, Churchill won four premierships with the Rabbitohs, including captain-coaching the team in his final season. He also captained the Australian team in Test matches from 1950-1955.

After his playing career ended, Churchill became one of rugby league’s greatest coaches, steering Souths to four premierships in the late 1960s and early 1970s. His legacy is such that the Clive Churchill Medal for the player-of-the-match in contemporary NRL grand finals is named in his honour.

Churchill was the greatest all-round champion the Rugby League code has known.

Horder was a prolific try-scorer

While other Souths wingers over the years have scored more tries, none have a better strike rate than Harold Horder. Horder averaged better than a try a match over 11 seasons with the Rabbitohs, and won two premierships. His incredible try-scoring record has stood the test of time for nearly a hundred years, making him arguably the best rugby league winger of all time. Horder is also the only Souths player in history to have scored five tries in a premiership match twice. To top it off, he was a handy goal-kicker as well.

Greg Inglis is the only modern day Souths player I’ve found a place for in my all-time greatest XIII. Although he hasn’t played a lot in the centres for Souths since joining the club as a key signing in 2011, he is likely to play in that position more in the latter part of his career. He has also excelled as a centre in the State of Origin arena for Queensland for several years, as well as in Test matches for Australia. That versatility allows you to find a spot for him, given that the immortal Clive Churchill has the fullback spot nailed down.

Inglis was already an established star when he arrived at Souths, and has been a focal point of their attack ever since. It was fitting that he scored the final try in Souths’ drought-breaking 2014 premiership win, celebrating it with his trademark ‘goanna walk’.

Paul Sait was a powerful and versatile centre/back-rower who won two premierships with Souths in 1970 and 1971. He played in the centres early in his career during an era where the club had a glut of forward talent, before later moving into the backrow. Players transitioning from the backs to the forwards was less common in those days, but Sait’s outstanding form for Souths over the years saw him selected to play Tests for Australia in both positions. 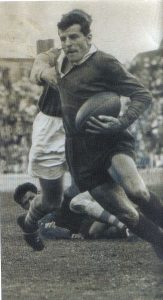 Like Harold Horder, Ian Moir was another Souths winger with a phenomenal strike rate. He averaged almost a try a match over seven seasons with the famous club. Reportedly the quickest winger of his era, he scored a hat-trick of tries in South Sydney’s 1953 grand final win, which was one of three premierships he achieved with the Rabbitohs. His finishing ability for Souths resulted in him being selected in Australia’s successful 1957 World Cup team.

Denis Pittard was the first player to win two Rothmans Medals, the equivalent of today’s Dally M Medal for the best player in the competition. Evidence of his ability is the fact that he won those two awards as part of a champion Rabbitohs’ team that contained several internationals. He helped the club achieve three premierships during his time in first grade at Souths.

Bob Grant won three premierships with Souths during the golden era for the club in the late 1960s and early 1970s. He and five-eighth Denis Pittard were the best halves pairing in the competition for several seasons. A career highlight for Grant was scoring two of the Rabbitohs’ three tries in their 1970 grand final win over Manly. His consistent excellence saw him named Rugby League Week’s Player of the Year in 1971.

No Souths forward has a tougher reputation than John Sattler after his heroics in playing almost an entire match with a broken jaw as captain in Souths’ brutal 1970 grand final win. Sam Burgess revived memories of that feat when he played nearly a full game with a broken cheekbone as captain in Souths’ 2014 grand final win. Both efforts are considered among the most courageous grand final performances of all time. While Sattler is best remembered for that one encounter, he was an outstanding performer for almost a decade at South Sydney. Sattler captained the Bunnies to four premierships during his career and led the Australian Test team in 1969 and 1970.

It wasn’t about trying to be a hero. It was just something that had to be done. It was a grand final and nothing was going to stop me.

Elwyn Walters was a skillful dummy half and strong defender, who won three premierships with South Sydney. He only missed a fourth grand final win with Souths through injury. Walters was also a great ball-winner back in the days of contested scrums. That skill was a major part of the hooker’s role in rugby league in that era. Walters’ all-round ability saw him selected for two Kangaroo Tours to Great Britain and France during his time at Souths.

John O’Neill was a tough, aggressive prop who won four premierships with the Bunnies in the late 1960s and early 1970s. Due to his big frame, he was nicknamed ‘Lurch’ after the similarly large butler character in The Addams Family, a popular TV show at the time. He and John Sattler formed arguably one of the toughest front row pairings ever seen on a rugby league field.

Bob McCarthy is the all-time leading try scorer among forwards to have donned the red-and-green jersey and is often cited as one of rugby league’s greatest second rowers. His most famous was an 80 metre intercept in the 1967 grand final against Canterbury, which helped the Rabbitohs to a two-point win. That try alone demonstrated the considerable pace he had to go with his size and strength. McCarthy was also an influential member of Souths’ 1970 and 1971 premiership-winning sides. He later captained the Bunnies and led the Australian Test team in 1973. 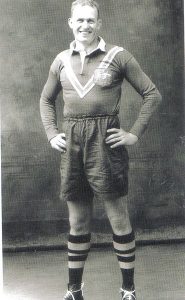 Jack Rayner started his career with Souths at the late age of 25 due to serving in the Australian army in Papua New Guinea in World War II. After the War ended, his leadership skills saw him rise quickly to be the captain and then captain-coach of the club for the majority of his playing career. Rayner steered Souths to five premierships, an all-time record for a captain-coach, and is deservedly remembered as one of the finest Rabbitohs players.

Ron Coote was a tall, rangy lock with a distinctive running style. He was also well known for his brilliant cover defence. Coote won four premierships with the champion Rabbitohs side of the late 1960s and early 1970s. He was rewarded for his stellar Souths form by being named captain of the Australian team for the World Cup held in Great Britain in 1970, a tournament that the Kangaroos won.

Coote played alongside Sattler, Walters, O’Neill, McCarthy & Gary Stevens in what was arguably the greatest forward pack of all-time.

So those are my selections as the best South Sydney Rabbitohs players. I can’t even find a spot for Sam Burgess given the career achievements of the star-studded forward pack. Some other very handy players haven’t made my team, like Eric Simms (fullback), Mike Cleary (winger), Benny Wearing (winger), Nathan Merritt (winger and Souths all-time leading try scorer), Ray Branighan (centre), Alf Blair (five-eighth), Les Cowie (lock), George Treweek (second-row), and George Piggins (hooker). None of them would be out of place.

What are your thoughts?