There have been many outstanding Australian rugby league teams over the decades, but some performances stand above the rest. These 10 club sides dominated the competition in their respective seasons.

A Premiership-winning season made all the sweeter by the fact that they were denied the chance to win one two years earlier due to penalties for breaching the salary cap.

While the Bulldogs didn’t top the table at the end of the regular season – being edged out on points difference by the Roosters – Canterbury clocked the second-highest total points haul in competition history (871), at an average of 31 points per game.

On eight occasions the Doggies scored 40 points or more, helped by the clever playmaking of Brent Sherwin and Braith Anasta, while centre Willie Tonga and wings Matt Utai and Hazem El Masri were prolific in terms of try-scoring.

The club’s 22 victories remains in the top three for the most wins in a single season.

A controversial selection on this list given the Eels fell short at the final hurdle, losing 30-24 to Newcastle in the final, but worthy of inclusion due to what Parramatta achieved prior to that.

To this day, no side has come close to matching Parramatta’s attacking exploits in 2001, where they finished the year with 943 points, at an average of 32.5 per game.

With the accurate boot of Jason Taylor clocking up 116 goals across the season, and a string of lethal attacking backs such as Brett Hodgson (17 tries), Luke Burt (13 tries) and Jamie Lyon (15 tries), there was no stopping the Eels once they got going.

Their 22 victories in 2001 ranks equal-third for the most wins in a season, while they rode a 10-match winning streak from Round 19, which sadly for them ended at the hands of the Knights in the grand final.

A stellar campaign which was soured by Manly suffering an upset loss in the final, the Sea Eagles’ ‘95 season still sits in the record books in a couple of categories.

It couldn’t have started any better, with 15 wins from their first 15 games going down as the best start to a season in Premiership history.

They would achieve 22 wins by the end of it, falling one short of their best year on record which saw the club win 23 matches.

Manly outscored their opponents 176 points to 52 in their last four games in the regular season, but fell away in the finals, finishing with a 17-4 loss to the Bulldogs in the final.

The Sea Eagles would get their revenge a year later, claiming the Premiership, but must look back at 1995 as a huge missed opportunity given their pre-finals dominance.

It started with a draw and ended with an undefeated season, as Balmain went all the way to win their first ever title.

While the Tigers were near flawless in 1915, they were pushed all the way by Glebe who finished the campaign, which at this stage was still run over a league format rather than with a grand final, just two points behind them and with a superior points differential.

Balmain became specialists in grinding out victories, winning seven games by margins of 10 points or less, but enjoyed a couple of commanding victories as well, thrashing Western Suburbs (34-0), North Sydney (28-0) and Annandale (28-6).

Pint-sized fullback Charles Fraser – the man who replaced Dally Messenger as the Australian Test custodian – led the way with 72 points that year, weaving magic from the back along with winger Jack Robinson who scored 10 tries. 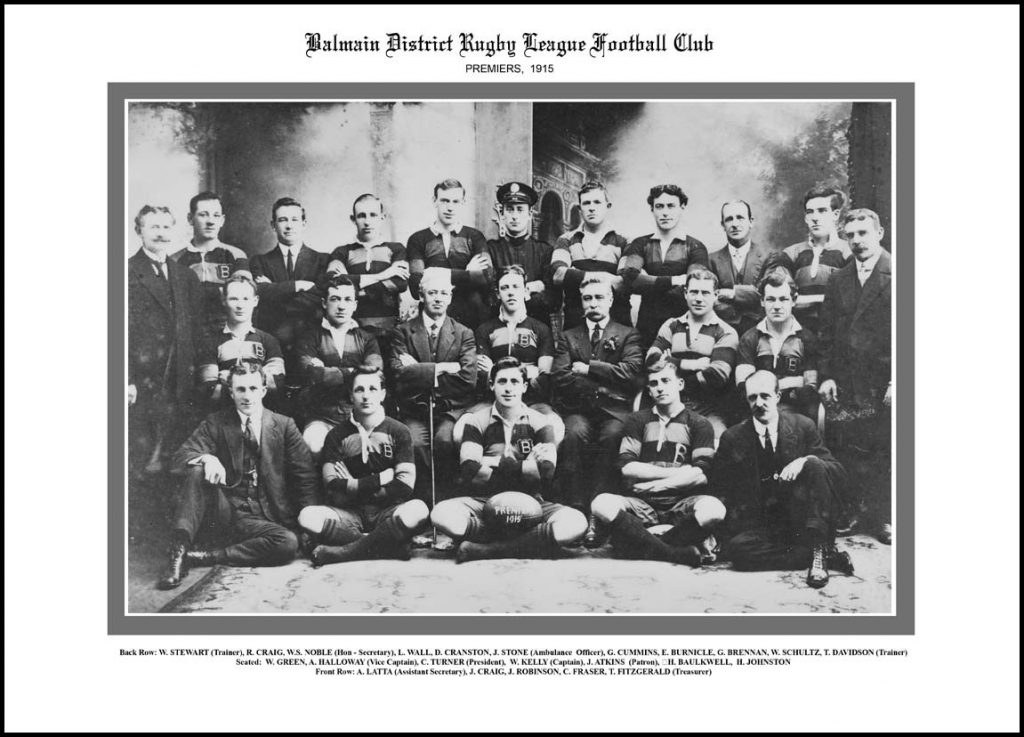 Finishing the regular season six points ahead of your nearest rival is impressive enough, but Penrith achieved it along with a commanding points differential which dwarfed the rest of the competition.

The Panthers’ scintillating attack – headlined by Hall of Famer Greg Alexander and crafty five-eighth Steve Carter – yielded an average points tally of 21.9 per game, while defensively they gave up only 11 per match on average.

In both categories Penrith were the best in the competition in 1991, while no other team who made the finals got to within 100 of the Panthers’ +233 differential.

The Phil Gould coached team enjoyed a seven-game undefeated start to the year and won six straight in the middle part of the season, perhaps most importantly perfecting the art of winning tough when they had to, with eight of their victories being by margins of eight points or less.

The Panthers finished the season with a 19-12 win over Canberra in what turned out to be a classic grand final played in front of 41,815 at the Sydney Football Stadium.

On their way to a second consecutive Premiership in 1936, Eastern Suburbs became the second club ever to achieve an undefeated season. 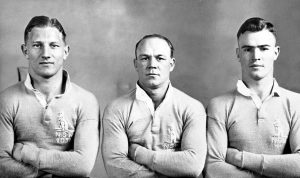 Finishing the year with 13 wins and two draws, Easts made light work of Balmain in the grand final, running away with a 32-12 victory which was led by eventual NSWRL Team of the Century member Dave Brown.

The Roosters put on some commanding performances along the way, piling 50 points on University and defeating Newtown 36-3 to close out the regular season.

Winger Fred Tottey scored 25 tries in the ‘36 season – a feat made even more impressive when you consider Easts only played 15 games that year – and in doing so achieved a unique record of having scored four-pointers in 15 consecutive matches across 1935-36.

In addition to the mercurial Brown, the triumphant Eastern Suburbs’ side included Australian representatives Ray Stehr and Ernie Norman.

The Parramatta Eels of the early 1980s were among the most fearsome forces the game had seen, and with stars scattered everywhere through their side they won three consecutive Premierships between 1981-83.

It was the middle triumph which was the most impressive though, as Parra stormed to 23 wins from 29 appearances with separate eight and six game winning streaks mixed in there.

Led by blue and gold legend Peter Sterling at halfback, Parra averaged a touch under 24 points per game – 89 more than their nearest rivals and eventual grand final opponents Manly – with Steve Ella (23 tries), Eric Grothe (16 tries) and Brett Kenny (15 tries) all causing chaos with the ball.

The Eels were equally as impressive in defence in ‘82, averaging fewer than 10 points conceded per game.

Like many sides who dominated the regular season, Parramatta suffered a shock first-up loss in the finals, but came right to beat Manly 21-8 in the grand final at the SCG.

The Roosters powered to 19-consecutive wins between rounds 4 and 22 in a 1975 season where they won 22 of their 25 total games.

The feat sits equal-third in terms of the most wins by a club in a single season, and it was achieved off the back of a brilliant defensive effort from the club which saw them average only nine points conceded across the regular season.

Over the year they allowed more than 13 points against them only once, while halfback Johnny Mayes was a lethal threat on the other side of the ball, leading all try-scorers in the Premiership with 16.

Despite suffering a shock 8-5 defeat to St George in the major semi-final, Easts bounced back to crush them in the decider by 38-0, their biggest winning margin of the season.

The Eastern Suburbs team – which boasted names such as Arthur Beetson, Mark Harris, Ron Coote and Russell Fairfax to name a few – also won the Amco Cup that year under the coaching of the legendary Jack Gibson.

The greatest season in the club’s history, South Sydney won 12 of 12 Premiership matches to win the league by a comfortable 10 points and also claimed the City Cup (knockout).

Such was the Rabbitohs’ dominance in the 1925 season, it directly encouraged the NSWRL to introduce a finals series the following season in order to maintain interest in the competition.

The team was led by mercurial five-eighth Alf “Smacker” Blair, and had try-scoring master Benny Wearing, who would finish his career with 144 four-pointers.

Souths scored 190 points and leaked just 90 in this year – the next closest team for points scored was 168 and least points conceded was 112 – while producing shut-out victories against University (13-0) and Eastern Suburbs (14-0).

It was a great year for the club as a whole, winning both the reserve and third grade Premierships as well. 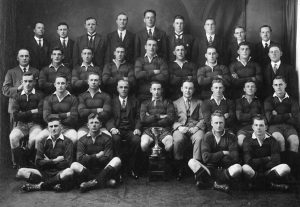 The Rabbitohs went undefeated through the 1925 NSWRL season

The fourth in St George’s incredible run of 11-straight Premierships, the 1959 season stands out due to the club going through their 20 Premiership matches without a loss.

Under the guidance of player/coach Ken Kearney, St George made the most of a roster which to this day remains one of the greatest ever assembled in the history of the game, featuring Australian Team of the Century members Reg Gasnier, Norm Provan and Johnny Raper.

A 20-20 draw with Balmain during the regular season was the only thing which resembled a blemish on the Dragons’ 1959 campaign, while on eight occasions they beat teams by margins of 20 points or more – a significant fact in an era where games were generally much lower scoring than those we see today.

The club eased to victory in the decider against Manly Warringah, winning 20-0 in front of 49,457 at the SCG.