The Parramatta Eels are one of the NRL’s most popular clubs, even though it’s been a long time since they’ve had premiership success. Founded in 1947, the club was dominant in the early-to-mid 1980s when they won all four of their premierships, including three in a row in 1981, ’82 and ’83.

Not surprisingly, my selections for their all-time greatest XIII feature many names from that 1980s era. In those pre-salary cap days, the Eels’ incredible backline was State of Origin/Test standard.

There are a couple of notable omissions in my team, like fullback Ken Thornett, who has a stand named in his honour at Parramatta stadium. Tough 1970s prop Ray Higgs and 1960s backrower Ron Lynch could also count themselves very unlucky to miss out. Current NRL winger Semi Radradra is another debatable absentee, but he has only played 68 first grade games and is set to leave the Eels at the end of 2017, so that has ruled him out of selection for me.

In the end, I’ve chosen players who had longer careers and/or more success in the blue and gold jersey. The stats listed for each player only reflect their first grade careers at Parramatta, not for other clubs or in representative matches. 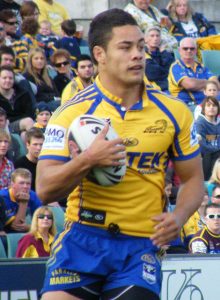 Jarryd Hayne was one of Parramatta’s greatest players

Jarryd Hayne was an electric Eel, winning two Dally M Player of the Year awards during his time at the club. Parramatta made the 2009 grand final largely on the back of some scintillating performances by Hayne in the latter half of that season. The highlights reel that was his audition tape for the San Francisco 49ers speaks volumes for his attacking skills, but he’s also a solid defender with a useful short kicking game. Eels’ fans were rightly disappointed to see him end up at the Titans after his gridiron stint. 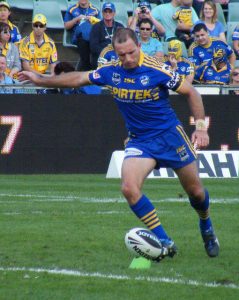 Goalkicking winger Luke Burt was an outstanding servant for the Eels

At just 17, Luke Burt became the youngest ever player to debut for the Eels and went on to make 264 appearances in the blue and gold. Slightly built and deceptively elusive, he became a pointscoring machine for Parramatta. The durable winger is the Eels’ all-time leading try scorer, holds the club record for points in a single match (28 – 3 tries, 8 goals) and sits tenth on the all-time list of NRL pointscorers with 1,793. Despite his consistent excellence, Burt was overlooked for higher honours and is considered by some as among the best players to never play State of Origin.

Mick Cronin was already an international when he signed with Parramatta from Gerringong in 1977. He didn’t have exceptional pace, but his ability to shrug off defenders, stand in tackles and set up his outside men was second to none. ‘The Crow’ was also a great goal-kicker using the old toe-poke style. He finished his career as Australian rugby league’s highest point-scorer and, although his record has since been eclipsed, his tally of 1,971 career points still places him 7th on the NRL’s all-time list. Cronin played centre in all four of the Eels’ grand final wins in the 1980s. Fittingly, in his last match, he kicked two crucial goals in the try-less 1986 decider when Parramatta beat Canterbury 4-2.

‘The Zip Zip Man’ is a cousin of rugby union’s famous Ella brothers but made his own name in rugby league with the Eels. He played in all four of Parramatta’s grand final wins, scoring tries in the 1981 and ’82 deciders. His speed and ability to slice through a half gap became legendary, as did his brilliant combination with five-eighth Brett Kenny and centre partner Mick Cronin. Ella’s 23 tries in 1982 was a club record for 33 years before it was broken by Semi Radradra in 2015.

Read our fantasy match up between the Parramatta Eels of 1982 and the Eastern Suburbs Roosters of 1975.

Eric Grothe was a big, blockbusting winger in the days before big, blockbusting wingers became the norm. ‘Guru’ had great speed for a big man and his ability to bump off defenders and break through tackles was a sight to see. He was also an effective cover defender, often using his pace to chase down opposing wingers on the other side of the field. Grothe became the prototype for the modern outside back and is widely considered as one of rugby league’s greatest ever wingers.

Brett Kenny formed a lethal halves combination with Peter Sterling in the champion Parramatta teams of the 1980s. A great ball runner with plenty of pace, Kenny also knew when to feed his outside backs. ‘Bert’ is the only player to have scored two tries in three grand finals (1981, ’82 and ’83). He almost replicated the feat a fourth time, having two tries disallowed in the 1986 Parramatta grand final win over Canterbury. That year, Kenny was also awarded the Golden Boot as the best player in the world.

Kenny was the man of the match in the 1982 and ’83 grand finals, retrospectively awarded the Clive Churchill Medal (as that honour was only officially introduced in 1986). Incredibly, he also scored two tries in a man-of-the match performance for Wigan in their 1985 Challenge Cup final victory at Wembley. Remembered as one of rugby league’s greatest five-eighths, Kenny was a big match performer, whether it was for Parramatta, Wigan, New South Wales or Australia.

Peter Sterling was a great ballplayer, tactician and organiser, with a brilliant kicking game – and the perfect halves partner for Brett Kenny. Besides being an integral part of the Eels’ four premiership victories in the 1980s, his individual career highlights include consecutive Dally M Player of the Year medals in 1986 and 1987, winning the Clive Churchill Medal in Parramatta’s 1986 grand final triumph, and being awarded the Golden Boot in 1987. He was also  halfback in the legendary Australian ‘Invincibles’ (1982) and ‘Unbeatables’ (1986) teams that completed undefeated tours to Great Britain and France.

[In one game, Parramatta] scored five tries, Sterling scored three and he put the other two directly on… it was like one person playing thirteen others. He could be that dominant.

‘The Bear’ was a tough, ball-playing forward who made his debut for the Eels at just 18.  He became the first Parramatta junior to play for Australia three years later, helping the Kangaroos to win the 1970 World Cup. O’Reilly was a regular member of the test team for the next five years. After stints at Penrith and Easts, he returned to Parramatta late in his career to play under legendary coach Jack Gibson. O’Reilly’s experience proved crucial, as he turned in a man-of-the-match display in the 1981 grand final to help the Eels to their first ever premiership.

Steve Edge was already a two-time premiership winner with St George when he joined the Eels in 1980.  Together with Jack Gibson, he provided leadership and a winning mentality to the club, captaining the team in their hat-trick of premierships in the early ’80s (1981-1983). Edge is the only man in Australian rugby league history to have captained two different clubs to premierships. He was an effective defender, dummy half and ball-winner (in the days of contested scrums), who left the flashy play to the champions around him.

After starting his career at Souths, Brian Hambly moved to Wagga where he became a Kangaroo (back in the days when you could do that from country football!). He signed for the Eels in 1961 for a then-record transfer fee of 2,500 pounds. Parramatta had finished with the wooden spoon eight times in the previous ten seasons. Together with fellow internationals Ron Lynch and the Thornett brothers, Hambly helped Parramatta gain credibility in the 1960s. The Eels qualified for the semi-finals for the first time in 1962 and repeated the feat for the next three seasons. Hambly’s brilliant form with the Eels saw him continue his test career for five more years.

The younger brother of famous Eels and Australian fullback Ken, Dick Thornett was a dual rugby union/rugby league international – something that is much harder to achieve in the forwards than the backs. His transition to rugby league was immediately successful, representing the Kangaroos in his first year after making the switch. Thornett was one of the first genuine ball-playing forwards in the game and helped Parramatta become a force in the 1960s after their mediocre beginnings. Amazingly, the supremely talented Thornett also represented Australia at the 1960 Olympics in waterpolo.

No other player has made more first grade appearances for Parramatta than second-row warhorse Nathan Hindmarsh. A tireless performer, ‘Hindy’ averaged nearly 50 tackles a match over the course of his career and once churned through an incredible 75 in a match against the Storm. Hindmarsh was a mainstay of New South Wales and Australian teams during his career and was voted Rugby League Week’s Player of the Year in 2004 and 2005. Sadly, he never won a premiership with Parramatta, playing in two losing grand finals. 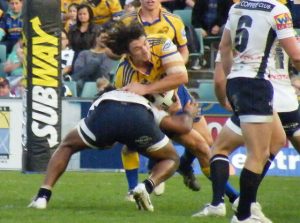 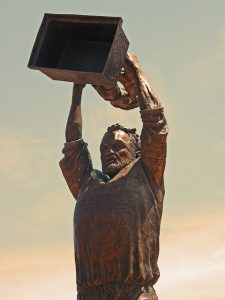 The statue of Eels’ champion Ray Price at Parramatta Stadium

Like Dick Thornett, Ray Price was a dual rugby union/rugby league international forward. Nicknamed ‘Mr Perpetual Motion’, his phenomenal work rate and toughness was legendary. He was a key member of Parramatta’s forward pack in each of their four premiership wins, fittingly ending his career as a winner with fellow Eels’ legend Mick Cronin in Parramatta’s 1986 grand final victory over Canterbury.

Price won the Dally M Player of the Year medal in 1982 and also that award’s predecessor, the Rothman’s Medal, in 1979. He was undoubtedly the dominant backrower of his era, claiming the Dally M Lock of the Year award for five straight seasons. It’s little wonder that Price has a statue in his honour at Parramatta Stadium.