The St George Illawarra Dragons are the second most successful club in Australian rugby league history. The Dragons have won 15 premierships, which places them behind only the South Sydney Rabbitohs, who have won 21.

They won a record-breaking 11 premierships in a row between 1956-66; a feat that will never be repeated. Beside the fact that it’s an incredible achievement, the salary cap in the NRL today makes it extremely difficult for a team to even win back-to-back premierships, let alone keep a team chock-full of internationals together for a long period like St George did in their golden era.

The Illawarra Steelers had a far shorter history, only competing for 17 seasons before the merger with St George. The Steelers still produced some notable players, though, who also donned the famous red V jersey in the latter part of their careers post-merger, like winger Rod Wishart and centre Paul McGregor.

Some other great players also had longer stints with both clubs pre- and post-merger, like five-eighth Trent Barrett (who won the Dally M Medal in 2000), the versatile utility Shaun Timmins and lock Brad Mackay.

Not surprisingly, though, only three players who didn’t feature during some part of St George’s golden era have made my all-time greatest XIII, such is the magnitude of that 11-premiership streak in rugby league history. The St George Dragons players of that era were truly incredible and three are members of the exclusive club known as The Immortals.

Inevitably, some great players who were part of that era have missed out, like Bobby Bugden (halfback), Elton Rasmussen (second row), Harry Bath (second row) and Ian Walsh (hooker). I also couldn’t find a spot for modern day Canterbury flier Brett Morris (who has played the bulk of his career with the Dragons) or the freakishly talented fullback/centre Ted Goodwin from the 1970s. Dual rugby union/rugby league international Michael O’Connor also had four seasons at St George in the early 1980s, but I couldn’t squeeze him in (O’Connor is named in our greatest Manly Sea-Eagles line-up). 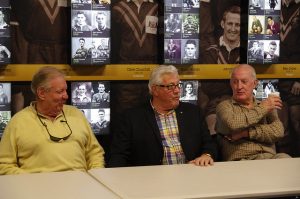 Graeme Langlands was named as rugby league’s fifth immortal in 1999. He began his stellar career in the latter half of Saints’ magical premiership run in the centres, before moving to fullback. Such was his class, Langlands played Tests for Australia in both positions, and he became captain-coach of the Kangaroos in the early 1970s.

He had a long stride and the unusual ability to step well at pace off both feet, making him a major attacking threat. His combination with St George halfback Billy Smith terrorised opposition defences. He was also a great goal-kicker, twice being the season’s leading point-scorer in the competition during his career.

Johnny King holds the St George record for the most career tries, scoring 143 over his 12-year career. He scored tries in every St George grand final win between 1960 and 1965, including the only tries scored in the 1962 and 1964 matches. He was the competition’s leading try-scorer twice, and formed a potent left side attacking partnership with centre and rugby league immortal Reg Gasnier.

Reg Gasnier was one of the original four immortals named by Rugby League Week when they came up with the concept. He was a potent attacking weapon, averaging better than a try a match wearing the red V over nine seasons, as well as setting up numerous tries for winger Johnny King.

Gasnier’s ability to swerve and accelerate through gaps often left defenders grasping at thin air. He both captained and captain-coached Australia in Test matches during the 1960s. A broken leg unfortunately resulted in him retiring when he was just 28, but he had already left a great legacy to both the Dragons and rugby league. To this day, the brilliant Gasnier is universally regarded as rugby league’s greatest centre.

Reg Gasnier’s nephew Mark made his own name as a centre for the Dragons, New South Wales and Australia more than thirty years after his famous uncle. Mark had size that Reg didn’t have, but possessed a great swerve reminiscent of Reg, as well as his own considerable pace for a big man. He was also a part of the Saints’ grand final-winning team in 2010 that broke a 31-year premiership drought for the club.

Eddie Lumsden played in nine premiership-winning teams with the Dragons, scoring three tries in both the 1959 (versus Manly) and 1961 (against Wests) grand final victories. Like his long-time wing partner Johnny King, he was the season’s leading try-scorer on two occasions. Remarkably, Lumsden’s career strike rate is even better than King’s. Both King and Lumsden are considered among the greatest rugby league wingers of all time.

Nicknamed ‘Poppa’ because he went bald at an early age, Clay played in eight red V premiership teams. That number could have been ten, but for injuries in 1962 and 1963. He began his career as a lock, and when he transferred to the number six jersey he played like an extra forward, often taking hit ups as well as effectively servicing St George’s talented outside backs. Clay was also a punishing defender, due to his early career pedigree in the forwards.

Billy Smith joined the Dragons as a centre, but was moved to halfback by captain-coach Norm Provan in 1964 in what proved to be a masterstroke. Small but tough, a great organiser and equipped with a brilliant kicking game, Smith went on to become one of rugby league’s greatest number 7s. Along with Graeme Langlands, Smith is largely credited with keeping St George competitive in the years after a lot of the other stars from their golden premiership era had retired.

A noted hard man, Billy Wilson was revered for his toughness in being able to continue playing through injury, as well as his ability to be an enforcer when necessary. He was sent off in the 1962 grand final win for a “get square” on a young Wests’ prop who had earlier knocked out Saints’ captain Norm Provan and forced him to leave the field on a stretcher.  Wilson didn’t take a backward step against anyone. 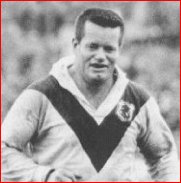 Ken Kearney was a dual rugby union/rugby league international and a fine leader. He was St George’s hooker during the first six of the Dragons’ 11 premierships in their golden run. He was their captain for the first one in the streak in 1956, then captain-coach of the premiership winning sides from 1957-61. His success with St George and shrewd tactical brain saw him selected as captain and later captain-coach of the Australian Test team.

Craig Young was another tough, uncompromising prop and a fine leader, as evidenced by the fact that he was chosen to captain the St George team at just 22 years of age. He led the team to a premiership in his first year as captain in 1979, and remained the club’s leader for the rest of his career. He was selected for two Kangaroo Tours to Great Britain and France, and was named Player of the Tour in 1978.

“Rocket” Rod Reddy was a skilful backrower in attack, but also very tough. He was known for being an enforcer in the 1970s and early 1980s when the game wasn’t as clean as it is today. Because of his all-round skills, Reddy was an invaluable member of the St George forward pack in a very tough era.

Reddy’s consistent form with St George was rewarded with selection on two Kangaroo Tours to Great Britain and France. He was also one of the first New South Wales-based players chosen for the inaugural Queensland State of Origin team in 1980.

Norm “Sticks” Provan is a giant of a man and a legend of rugby league. The famous muddy ‘Gladiators’ photo of Provan and the diminutive Wests captain Arthur Summons embracing after the 1963 grand final has been immortalised on the Provan-Summons trophy that is presented to modern-day NRL premiers.

Very physically fit and a great leader, Provan’s work rate in both attack and defence helped lay the platform for 10 grand final wins for the Dragons, including four as captain-coach. He is regarded by many as the greatest second rower in rugby league history.

Like Reg Gasnier, Johnny Raper was one of the original four immortals chosen by Rugby League Week. Raper was known for his great cover defence, wonderful attacking skills and incredible work ethic. He reportedly honed his physical fitness through an arduous training regime, which allowed him to play at an intensity that was unmatched by other backrowers of his era. ‘Chook’ was a mainstay of representative teams throughout his career and captained Australia to victory in the 1968 World Cup. He is widely lauded as the best lock forward of all time.

So, those are my selections of the very best St George Dragons players. What are your thoughts?

And would this incredible Dragons line-up beat the greatest South Sydney XIII in a fantasy match-up?