The Canterbury-Bankstown Bulldogs have a long and proud history, winning eight premierships since they entered the NSWRL/NRL in 1935. Known originally as “The Berries”, the club has been home to some wonderful rugby league players over the past 80 years.

Coming up with their all-time greatest XIII is a challenge and the selections are certainly open for debate. There are some notable omissions in the line-up I’ve selected, such as British import James Graham, New Zealand great Sonny Bill Williams, 1990s stars Jim Dymock and Jason Smith, and ’80s quartet David Gillespie, Andrew Farrar, Chris Mortimer and Greg Brentnall. For some of those players, their time at the Bulldogs wasn’t the major part of their career. For others, well, there were simply some line-ball decisions, which had to made.

In the end, the players I’ve selected served the club well over a long period of time and had considerable success while wearing the blue-and-white. The stats listed for each player reflect only their matches for Canterbury, not with other clubs or in the representative arena.

Les Johns was a slightly built, goal-kicking fullback with abundant attacking flair and solid defence. Known for his great speed, Johns played much like a modern fullback, bobbing up all over the field looking for opportunities. Injuries ultimately shortened his career, but there is no denying the incredible impact he had at Canterbury. Johns played in an era of great fullbacks, like Graeme Langlands (St George), Eric Simms (South Sydney) and Ken Thornett (Parramatta), but was still able to force his way into many New South Wales and Australian teams.

Chris Anderson was a brilliant finisher in an era where Canterbury’s attacking style of play led them to become known as ‘The Entertainers’. A member of their 1980 premiership-winning team, he broke season and career try-scoring records for the club during his fourteen year stint. Anderson was rewarded for his consistent form with two Kangaroo Tours to Great Britain and France. 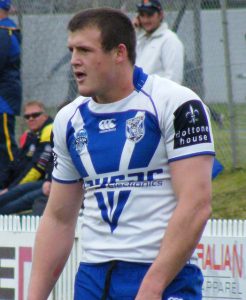 Although he started his career with St George, Josh Morris has now been with the Bulldogs for eight seasons. The son of Dragons’ great ‘Slippery’ Steve Morris and twin brother of Brett, Josh has great speed for a big man and knows his way to the try line. A veteran of 14 State of Origin appearances, Morris is on track to become just the third Bulldog to score over 100 career tries. He’s also very effective in defence and sets up his outside men well.

Like Morris, Johnny Greaves started his career at St George, but it was at Canterbury that he left his mark. He played in the Bulldogs’ 1967 Grand Final loss to Souths, went on that year’s Kangaroo Tour and was a part of Australia’s victorious 1968 World Cup squad. Greaves played nine seasons with the ‘Dogs and had the honour of captaining the club in 1970. His brilliance saw him rated by none other than the Immortal Reg Gasnier as one of the best centres he ever played with. 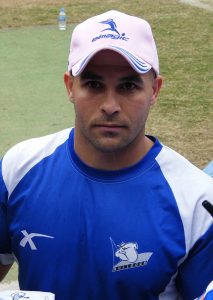 Hazem El Masri is widely remembered as a goal-kicking genius, but he was also only the seventh player in NRL history to score more than 150 career tries. The Lebanese-born winger is the highest scorer in Australian rugby league history with 2,418 points against his name. Six times during his career he was the competition’s leading point-scorer and his season record of 342 still stands to this day. ‘El Magic’ is one of only 11 players to make over 300 first grade appearances for one club and was a key member of the Bulldogs’ 2004 premiership-winning team.

After starting his career with Western Suburbs, Terry Lamb made Belmore Oval his home for the next thirteen seasons until he retired at the end of 1996. He was known for his uncanny ability to back-up the ball carrier and be in the right place at the right time to score tries. Twice during his time at the Bulldogs he finished the season as the competition’s leading try-scorer and on one occasion he was the leading point-scorer.

Lamb won the Rothman’s medal (the equivalent of today’s Dally M Medal for the best player in the competition) in 1984, his first year with the Bulldogs, and was pivotal in helping the club to premiership victory. He missed the ’85 grand final due to injury, but starred in Canterbury’s 1988 triumph and later captained the team to another title in 1995. His wonderful record saw him retire as one of Australian rugby league’s greatest five-eighths.

Steve Mortimer was a dynamic attacking halfback, also known for his brilliant cover defence. With his speed off the mark and ability to chip and regather, he was always exciting to watch with the ball in hand. ‘Turvey’ played in four premiership-winning teams for the Bulldogs, including captaining the side in their 1984 and ’85 grand final victories. Mortimer formed a lethal halves combination with Terry Lamb in the second half of his career.

Starting his career as an energetic backrower, Steve Price moved into the engine room and transformed himself into one of the best props of his era. He scored the first try in Canterbury’s 1995 grand final win over favourites Manly, but missed out on captaining the team in their 2004 premiership victory due to a knee injury suffered a week before the decider. Johnathan Thurston famously gave his premiership ring to Price to compensate. A terrific leader, Price was named Dally M Captain of the Year on two occasions (2002, 2004) and Rugby League Week’s Player of the Year in 2003.

Fantasy Match: 2004 Canterbury Bulldogs vs. 1992 Brisbane Broncos. Who would win?

George Peponis was a Greek-born hooker who somehow found the time to complete a medical degree, as well as captaining both the Bulldogs and Australia during his glittering career. He was best known for his ball-winning ability in the days of contested scrums, as well as burrowing over for tries from dummy-half close to the line. Peponis led the Canterbury team known as ‘The Entertainers’ to a famous grand final victory in 1980, ending a 38-year premiership drought for the club. 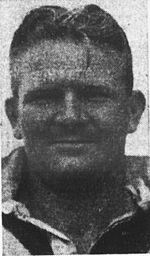 Eddie Burns was a tough, mobile front-rower, also known for his ability to score tries through his support play. For nearly three decades after his retirement, he was the club’s leading career try-scorer. Burns made his debut for Canterbury as a teenager and was sent off in his first match in the club’s inaugural season. Despite that inauspicious start, he spent the next sixteen seasons with Canterbury and was an important part of the Bulldogs’ 1938 and 1942 premiership wins, the first two in the club’s history.

After starting his career at Parramatta, Andrew Ryan joined the Bulldogs in 2003 and in only his second year captained the team to their 2004 grand final win (due to Steve Price’s absence). He took on the captaincy job permanently in the following seasons and developed into one of the game’s great leaders. ‘Bobcat’ was a hard-working, dynamic and durable second rower, whose form consistently earned him selection for New South Wales and Australia during his nine years with the ‘Dogs. 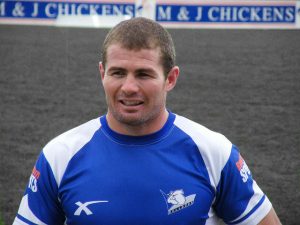 With his distinctive afro hairstyle, Willie Mason established himself as a cult figure and representative player over eight seasons with Canterbury. As much as anything, his sheer size (196cm & 119kg) made him a handful in attack for opposition defences. Mason produced an outstanding performance in the Bulldogs’ 2004 grand final win and was awarded the prestigious Clive Churchill Medal for best-on-ground. Although he went on to feature for several other clubs, Mason undoubtedly played the best football of his career with Canterbury.

Paul Langmack was a skilful ball player and hard working defender, who was a key member of Canterbury’s dominant forward pack in the mid-to-late 1980s. An obvious talent, Langmack made his debut aged just 18 and became the fastest player in history to chalk up 100 first grade games, just after his 22nd birthday. He played lock in Canterbury’s back-to-back ’84/’85 grand final victories, then toured with the Kangaroos in 1986. He was again influential in the Bulldogs’ 1988 premiership, before leaving the club in 1991 to join Western Suburbs.