There have been a plethora of incredible halfbacks and outstanding five-eighths throughout rugby league’s history. What matters most on the field, though, is not individual brilliance, but how these two positions combine. Below are some of rugby league’s greatest club halves combinations.

Widely regarded as Canterbury’s two greatest players, the Bulldogs tenures of Steve Mortimer and Terry Lamb overlapped five seasons (1984-88), during which time the club secured three premierships and featured in four Grand Finals. Halfback stalwart Mortimer was installed as captain in 1984, the season Lamb joined the Bulldogs from Western Suburbs and struck up a brilliant combination with the representative veteran. Lamb’s toughness, skill and peerless support play provided an excellent foil for Mortimer’s unpredictable genius. The duo also paired up in one Origin match for NSW in ’84.

Cast-iron tough five-eighth ‘Poppa’ Clay won eight Grand Finals with the incomparable St George side of the 1950s and ’60s, but formed his most enduring halves combination with Bobby Bugden. Murwillumbah product Bugden was the Dragons’ halfback in the first six of their world record streak of Grand Final wins, featuring alongside Clay in the 1958-61 deciders. Both toured with the 1959-60 Kangaroos, with Clay playing the last of his eight Tests abroad while the pugnacious Bugden made his only two Test appearances against France on home soil the following season.

The shattering disappointment felt by the Manly club and its supporters earlier this year after Daly Cherry-Evans (Gold Coast) and Kieran Foran (Parramatta) signed elsewhere for 2016 gives a fair indication of their status – and the success the Sea Eagles enjoyed with the young stars in the playmaking roles. ‘Foz’ and DCE have played together over 100 times since the latter’s debut in 2011, sharing in a premiership triumph that year and spearheading Manly’s drive to another Grand Final two years later. Kiwi Test star Foran and Kangaroos utility Cherry-Evans opposed each other twice in the No.6 jumpers during the 2014 Four Nations.

The only pairing in this list to both be included in the ARL’s Greatest 100 Players in 2008 aside from Sterling and Kenny, Ernie Norman and Viv Thicknesse were the linchpins of the devastating Eastern Suburbs combination of the 1930s, starring together in three premiership triumphs from 1935-37. Stocky five-eighth Norman and slick-passing halfback Thicknesse were responsible for unleashing the Tricolours’ magnificent backline that featured Dave Brown, while they played together in four Tests against New Zealand and Great Britain (1935-36).

A contrast in styles and personalities, the tenacious livewire Toovey and the laidback ball-playing genius Lyons complemented each other superbly in the halves for the Sea Eagles from 1988-99 – albeit sporadically as the 1990s wore on. Although Lyons came off the bench in the latter two, he and captain Toovey were the creative force behind the Sea Eagles’ drive to three straight deciders from 1995-97. Lyons’ last Test series was Toovey’s first, the club-mates pairing up in Australia’s two-match series in Papua New Guinea at the end of 1991. 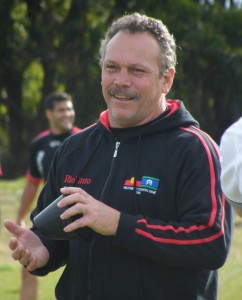 While Andrew Johns went on to become regarded as the greatest halfback the code has ever seen, older brother and five-eighth Matthew was equally important to Newcastle’s rapid rise to heavyweight status during the early years of ‘Joey’s’ career. The Cessnock siblings’ brilliant, uncanny combination reached its zenith during the Knights’ emotional charge to a maiden premiership in 1997. Andrew and Matthew teamed up in the halves twice at representative level: for NSW in the 1995 Origin series opener, and for Australia later that year against South Africa at the World Cup. Their seven-season partnership came to an end in 2000, when the Knights controversially forced Matthew to move on.

Another Cessnock product, Frank Stanmore debuted for Wests in 1948 and celebrated in the club’s premiership triumph that year, while Keith Holman joined the Magpies the following season – thus beginning one of the most celebrated halves partnerships in the game’s history. The pair crafted an innate combination over the ensuing five seasons, although ironically Wests won their last title in 1952 while Holman and Stanmore were both in Britain with the Kangaroos. But they enjoyed tremendous success together at representative level. Stanmore played nine of his 10 Tests alongside ‘Yappy’ Holman, beginning with the watershed Ashes series victory on home soil in 1950 and culminating in pairing up for four of the five Tests on the 1952-53 Kangaroo Tour.

The pair celebrated in Canberra’s 1989-90 Grand Final wins together with Daley in the centres and Stuart at halfback, but they are better known as a brilliantly balanced halves combination at club and representative level. Daley, a dynamic all-round attacking force (and recently named in our Team of the Decade), made a permanent shift to five-eighth in 1991, helping scheming ball-player Stuart steer the Raiders to another title in 1994. Two of the modern era’s foremost match-winners, Daley and Stuart teamed up in the halves nine times for NSW during four series victories, and led Australia to an Ashes series triumph in the key roles on the ’94 Kangaroo Tour.

Ipswich juniors Langer and Walters were the Broncos’ permanent halves combination from 1990-99, leading the club to its first four premierships. The duo, along with hooker and Kevin’s twin Kerrod, developed a phenomenal understanding that bordered on telepathy and was the catalyst for countless victories. Teammates on the 1990 and ’94 Kangaroo Tours, ‘Alfie’ and ‘Kevvie’ combined twice in the halves in Tests for Australia (Walters played the majority of his 11 Tests off the bench) and nine times for Queensland at Origin level.

The perfect balance before the modern-day trend of halves playing on one side of the field emerged, rather than the traditional first- and second-receiver combination. The vision and deft ball-playing skills of halfback Sterling, and the natural attacking ability and searing attacking class of five-eighth Kenny, were integral to Parramatta’s golden era of the 1980s, steering the blue-and-golds to their only four premierships to date. The young guns ousted Steve Mortimer and Wally Lewis for the Test halves spots on the 1982 Kangaroo Tour, and while Lewis’ presence saw Kenny play the remainder of his international career in the centres, ‘Bert’ teamed up with ‘Sterlo’ for NSW on seven occasions.