Comparing players from different eras by position, or by contribution to club or country, is exceedingly challenging – and ranking the greatest goalkickers of all time is no different.

Changes in techniques and technology over time means the sharpshooters of rugby league’s modern era generally dwarf the achievements of the legendary goalkickers of yesteryear, while goalkicking percentages were not generally kept prior to the 1980s.

This criteria for this list was sustained excellence over a career – with stats used where possible – along with match and season records set, and their ability to boot match-winning goals under pressure.

Current 80%-plus guns James Maloney, Michael Gordon, Jarrod Croker and Adam Reynolds may all command a place in the top 10 by the time they put the tee away, but the following players’ accomplishments will stand the test of time.

Dynamic centre Girdler was an inconsistent goalkicker early in his career with Illawarra and Penrith, travelling along with a percentage in the mid-60s range. But his performances for the Panthers during the 1997 Super League season marked him as one of the best in the game, kicking 76 goals from 82 attempts – an unheard of season success rate of 92.68 per cent. Girdler set several representative records in 2000, including an Origin record 10 goals from as many attempts in NSW’s game three thrashing of Queensland, and a world record 17 goals in Australia’s World Cup rout of Russia. He finished an admirable career with 624 first grade goals, kicking at over 80 per cent during his farewell 2004 campaign.

Second in premiership history with 917 career goals for Newcastle at 74.25 per cent, ‘Joey’ Johns was a magnificent clutch goalkicker. He booted a club record 110 goals in 2001 and followed that up with 102 in ’02, while he slotted a Knights-best 11 in a match in 2006 and nine or more in a match on five other occasions. Johns kicked 38 goals for NSW at Origin level and 89 in 30 appearances for Australia, including a then-Test record 12 against Fiji in 1996. Probably Johns’ most famous two points was his after-the-siren conversion from the touchline to sink St George Illawarra 32-30 in 2003. 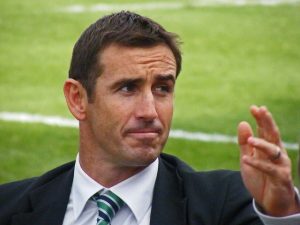 Scheming halfback Jason Taylor holds the premiership record for most goals with 942 in 276 games from 1990-2001, kicking at a career success rate of 75.24 per cent. He landed a North Sydney club record 108 goals in 1996 and ’98, while he booted a career-high 116 goals for Parramatta in 2001 – his final season before retiring – including a club record-equalling 11 from 11 in a match against Wests Tigers. Taylor kicked the Bears into the 1995 finals with a late sideline conversion to snatch draw against Gold Coast in the final round.

Nicknamed ‘Golden Boots’, Balmain great Keith Barnes kicked a then-premiership record 742 goals in 194 games from 1955-68. Barnes, from the front-on school of goalkicking, landed a club record 90 goals in 1956. His greatest days with the boot included a haul of 11 in 1960, two massive penalty goals to sink premiers St George 19-15 that same season, and seven second half goals against Manly in ’66 to inspire a 22-17 victory after the Tigers had trailed 15-2 at halftime. Barnes’ tally of 59 goals in 17 Tests includes 10 in a match against France in 1960, while he booted 101 goals as captain of the 1959-60 Kangaroo Tour squad.

The phenomenal right-to-left arc North Queensland superstar Thurston achieves off the tee marks him as one of game’s most unique goalkickers, but he also rates as one of the best ever. To the end of 2013, Thurston had kicked 820 goals for the Cowboys at 79.46 per cent, while his success rate from the sideline is extraordinary. The brilliant half has also landed an Origin record 96 goals for Queensland at the magnificent success rate of 79.33 per cent, while his 160 goals in 37 Tests is an Australian record.

Eric would get to training and stand on the halfway line and Clive Churchill would stand under the posts … . Eric would practise field goals from halfway, one after the other, for half an hour. Bang, bang, bang, straight over. He hardly ever missed.

The last of the great front-on goalkickers, Parramatta legend Cronin held all-time records for most goals in a career (865) and a season (123 in ’82) for 16 and 26 years respectively. Although his misses in the Eels’ 1977 and ’84 Grand Final losses were crucial, ‘The Crow’ landed 15 goals in deciders and was regarded as the code’s premier marksman throughout his career. Until 2015 the pointscoring phenomenon held the record for most Test goals for Australia with 141 in 33 appearances – including 10 in one Ashes Test in 1979. His unprecedented mark of 26 consecutive goals, set in 1978, stood for two decades.

Former All Black Matthew Ridge’s radar-like precision after joining Manly in 1990 changed Australian clubs’ perception on the importance of possessing a quality goalkicker – and sent talent scouts scouring New Zealand’s Rugby Union ranks for more like him. The fullback kicked 580 first grade goals for Manly and Auckland at 80.22 per cent, including a career-high 106 in the 1994 and ’95 seasons, while he landed 11 goals in a match for the Sea Eagles on two occasions. Ridge also kicked a Kiwis record 71 goals in 25 Test appearances.

El Masri was handed the daunting task of succeeding Daryl Halligan as the Bulldogs’ goalkicker in 2001, but he arguably exceeded his long-time teammate’s achievements with the boot. The elusive winger slotted a club record 11 from 11 against Souths in 2003, kicked over 100 goals in four seasons (including a premiership record 129 in 2003, which he extended by 10 goals the following season) and finished his career with 891 goals at 81.97 percent in becoming the highest point-scorer of all time. Forging a unique style – keeping the ball relatively low with a strong draw – El Masri landed a then world record-equalling 35 straight goals in ’03.

The first player in premiership history to break the 2,000-point barrier, Kiwi winger Halligan set new standards for goalkicking excellence during the 1990s. The Rugby Union convert landed 855 goals for Norths and Canterbury at 79.31 per cent, topping 100 goals in a season twice and kicking a then-Bulldogs club record 10 goals in a match three times. He broke Mick Cronin’s long-standing consecutive goals record with 30 in a row in 1998 – the year of his famous preliminary final conversion against Parramatta. Halligan improved as his career wore on, kicking at over 85 per cent in his last three seasons, while he is also credited with 60 goals in 20 Tests for New Zealand.