The North Queensland Cowboys entered the ARL/NRL competition in 1995. They joined along with three other teams as part of an ambitious expansion plan for the game. Only two of those clubs still remain in the NRL today – the Cowboys and the New Zealand Warriors. The other two, the South Queensland Crushers and the Western Reds, both became casualties of the Super League war within three years.

The Cowboys took a while to become a serious premiership contender, but they made their first grand final appearance in 2005 when they went down to the Wests Tigers. It took another ten years before they won their first premiership in the epic 2015 grand final against the Broncos in golden point.

Plenty of great players have had stints in Townsville over the years, but some were at the back end of their careers and didn’t stay long. I haven’t been able to find a place in my team for backline stalwarts like Ashley Graham and Josh Hannay, nor tireless forwards like Jacob Lillyman, Steve Southern and Travis Norton. All of them gave stellar service to the club. Modern day premiership-winning players like Justin O’Neill and Jake Granville have also missed out and these omissions are certainly worth debating.

The stats I’ve listed below for each player only reflect their matches for the Cowboys, not for other clubs or representative teams.

Matt Bowen was one of the most entertaining rugby league players to watch in the past few decades. He was a natural talent, electrifying in attack with great speed, footwork, ball skills and anticipation to back up the ball carrier and slice through a gap. He and Johnathan Thurston developed a brilliant combination.

Ty Williams’ try-scoring strike rate over his career shows what a great finisher he was for the Cowboys. A noted speedster, he also formed a great combination at the back with Matty Bowen, especially on kick returns. 2005 was undoubtedly the best season of Williams’ career – he crossed for 18 tries, played State of Origin for Queensland and helped the Cowboys to their maiden Grand Final appearance.

When you think of Brent Tate, you think of guts and determination in overcoming injury just as much as you think about how good a player he was when he was on the field. After starting his career at the Brisbane Broncos and then having a stint at the New Zealand Warriors, Tate joined the Cowboys as an established representative player and a key backline signing.

During his time at the club, he recovered from the third knee reconstruction of his career to play great football and force his way back into the Queensland and Australian teams. He was a hard running and reliable centre who always gave his all for every team he played for.

Paul Bowman was an original signing for the Cowboys for their debut season and he gave loyal service to the club for the next 13 seasons. He was there during the hard times when the club was trying to establish itself. Fittingly, he was also there when things started to improve and the Cowboys made their first grand final in 2005.

Bowman was a great defensive centre and a regular selection in Queensland State of Origin teams at the height of his career. He developed into a fine leader, captaining the Cowboys for four seasons.

Matt Sing played for Penrith and the Sydney Roosters before spending the last five seasons of his NRL career in Townsville. He was an established NRL pro and a State of Origin / Test player by that stage, and he used his experience to help the Cowboys rise up the ladder during his time at the club. Sing played some of his finest football with North Queensland; his try-scoring strike rate was phenomenal and the best of his distinguished career.

Even though he’s only halfway through his career, Michael Morgan is a gifted footballer who simply demands selection in this all-time greatest team. His speed and size make him a major attacking weapon for the Cowboys, and he’s also shown his versatility to play in other positions at both club and representative level.

Morgan’s cool head in setting up the last minute try for Kyle Feldt in the 2015 grand final sent that match into golden point extra time and will forever be a part of Cowboys’ highlight reels.

Johnathan Thurston’s selection in this team is obviously a no-brainer; he’s an Immortal in waiting. After joining the Cowboys from Canterbury to become the club’s chief playmaker, Thurston made an immediate impact, guiding North Queensland to their first grand final in 2005. Since then, he’s rejected lucrative offers from other sides to stay in Townsville and has helped build the club into the force it is today.

Though his selection is obvious, it’s still worth reflecting on the achievements of a player some consider to be the greatest halfback of all time. Thurston is North Queensland’s all-time leading point scorer. He’s the only player in the history of the game to win four Dally M Player of the Year awards, and the only one to be awarded three Golden Boots for the best player in the world. He was also the Clive Churchill Medallist in the Cowboys’ 2015 grand final win over the Broncos, icing the match with a field goal in golden point to spark wild celebrations in North Queensland. 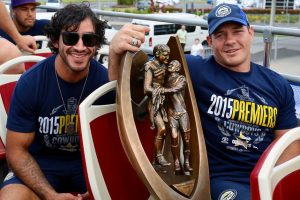 Matt Scott has become one of the best props in the game with his no frills work ethic and powerful charges. He’s a reliable workhorse, making the hard yards up the middle and being solid in defence. One of the first players picked in the Queensland and Australian forward packs for many years, Scott has also been rewarded for consistent and loyal service to North Queensland by being named as co-captain with ‘JT’ in the later stages of his career.

Aaron Payne was often underrated as a player, but he was an important part of Cowboys’ teams for more than a decade. Payne was a busy, creative spark out of dummy half who worked well with his more high profile teammates like ‘JT’ and Matt Bowen. He was a member of the Cowboys’ 2005 grand final team and won the Cowboys’ Player of the Year award in 2006 and 2008. If it weren’t for the emergence of Cameron Smith in the same era, there’s little doubt Payne would have played for Queensland during his career.

James Tamou formed a formidable front-row combination with Matt Scott, and his outstanding form with the Cowboys earned him 14 New South Wales and 12 Test jerseys during his time with the club. Tamou was influential throughout the 2015 premiership campaign and scored the Cowboys’ first try in their grand final win over the Broncos. After eight seasons, a big money offer from Penrith and salary cap pressures at North Queensland ultimately ended his time in Townsville.

Gavin Cooper started his career at the Cowboys, and then had stints at the Gold Coast and Penrith before returning to Townsville. Since coming back, he’s struck up a great combination with Johnathan Thurston in attack, running great lines and taking advantage of his halfback’s vision. In an era of great Queensland forwards, Cooper was finally rewarded with State of Origin selection in 2016. He scored a try on debut, running off a ‘JT’ pass, just as he’s done for the Cowboys so many times in his career.

After being signed from the Wests Tigers in 2004, O’Donnell added starch to the Cowboys during his six seasons with the club. He was a tough, aggressive second-rower who helped North Queensland make the semi-finals for the first time in 2004. In 2005, he was again an integral part of the Cowboys’ forward pack, leading from the front as they stormed into the grand final. O’Donnell’s style of play inevitably resulted in some judiciary appearances and suspensions, but there was no denying his impact on the field. He was chosen for both New South Wales and Australia while he was playing for the Cowboys.

No one has ever signed a 10 year, $10 million contract in the NRL until Jason Taumalolo came along. That’s how highly he’s valued by the Cowboys and he’s only 23. Despite his youth, there’s little doubt that Taumalolo is the most damaging forward in the game. His size, speed and footwork make him a major attacking threat, and he also hits hard in defence.

Taumalolo made his first grade debut at just 17 and has already achieved a lot in the game. Highlights include the 2015 Cowboys’ premiership, winning the 2016 Dally M Player of the Year medal, and being a part of the New Zealand Test team since he was 21. After the signing of his mega deal, Cowboys’ fans will be able to relax and enjoy seeing this human wrecking ball play out his career in Townsville.

So that’s my opinion on the North Queensland Cowboys’ all-time greatest 13. Do you think I’ve gotten it right? How would this side go against the other all-time greatest teams that we’ve covered in our series so far?