Since the inception of the NRL competition in 1998 the role of a forward has changed drastically, making any thought process around listing the best of them in that time very difficult.

For evidence of the evolution, just look at the difference in body shape and skillset of a player like Manly great Steve Menzies and current-day enforcer Sam Burgess, who for much of their careers played in the same position.

We set the rule that players had to have played at least six years in the NRL to be eligible for this list. That counted out quality players like Glenn Lazarus, who won the last of his five Premierships in the second year of the NRL competition and then retired.

Such is the calibre of the top 10, there’s no room for Kiwi legend Ruben Wiki, Broncos firebrand Gorden Tallis, while James Graham just misses out despite consistently being among the best props around in the last five years.

A relentless carrier of the ball who repeatedly set and then broke his own individual records for the most metres gained by a forward in a single game, Steve Price led from the front every single time.

While he lacked the dynamic ability of others on this list, and never stood out from the pack physically, the Dalby product brought a determined attitude to the middle of the park which meant there was no let up when it came to tackling him. Price was sublime in 2007 for the Warriors, chewing through an NRL-high 4515 metres that year, at an average of 196 metres per game. At the time he was just the third forward ever to hold the NRL’s yardage title, since records started being kept for that category in 1999.

To this day Price remains unmatched in the art of charges downs, frequently forcing errors from kickers and in some cases taking them out of the game altogether, while he was a natural leader who helped the Bulldogs to a Premiership-winning season in 2004 before lifting the struggling Warriors to back-to-back finals appearances in 2007-08.

Like a fine Cabernet Sauvignon, Corey Parker’s ability on a rugby league field seemed to get better with every year that passed, while in a minor miracle for forwards, his physical appearance actually got less rugged in that time as well.

A noted offloader, Parker often formed an important part of the attacking plan for the sides he was playing in, with many a smaller man benefiting off the Queenslander’s ability to hit the line and keep the ball alive. Not just a creative forward, Parker was always among the hardest workers for club, state and country, and was a reliable defender with more than a touch of fire in the belly when he needed it.

Through the second half of his 16-season career, he was more often than not a first-choice goalkicker, and from 2011 onwards usually one of the first names listed on the Maroons teamlist as they embarked on a decade of dominance. He finished his career with well over 36,000 run meters to his name and more than 21,000 playing minutes.

Through the early years of the NRL Civoniceva formed half of the competition’s best front-row partnership, combining with Shane Webcke to dominate opposing big men.

In 15 seasons, which saw the Suva-born giant play well past his 36th birthday and amass 45 Tests for Australia and 32 State of Origins for Queensland – both records for a forward at the time – he then kept playing for both Redcliffe and Fiji after NRL retirement, in a nod to his incredible longevity.

A fearsome carrier of the ball, who could continue to drive through the tackle with his leg drive, big Petero was feared on the field but universally respected.

The greatest try-scoring forward in the history of the game, ‘Beaver’ enjoyed a career which played out across three decades where the game experienced significant changes.

A four-time winner of Dally M forward titles, Menzies had already won two of them before the NRL concept was put in play, wasting no time at all by being announced the best second-rower in the competition in his rookie season back in 1994. By today’s forward standards Menzies was tiny – usually playing at under 100kgs – but brought technical brilliance to the game via footwork and clever hole-running, whether on the edge or the middle of the park, which allowed him to score 180 tries for Manly and the Northern Eagles. Up until 2017 that number was enough to place him second behind the great Ken Irvine as the most-prolific scorer in history of the Australian game.

Menzies’ remarkable durability saw him play 349 first-grade games down under – not counting his 100-plus he amassed in the UK – while he was a regular for both state and country through that time as well.

The heart and soul of Parramatta for the best part of 15 years, Hindmarsh had a motor which meant he was often unmatched in terms of productivity on a rugby league field.

He won five of a possible seven Dally M Second Rower of the Year awards between 2000-06, twice being voted the Rugby League Week Player of the Year in that time, as Parramatta enjoyed periods of dominance, while ultimately failing to take the final step in earning a Premiership. Hindmarsh’s appetite for work saw him finish his 330-game career with an NRL record of 11,981 tackles, along with 4,408 career runs, and 33,711 metres gained.

The nature of his comedic work in television these days probably takes away from his feats as a player, but there should be no doubting ‘Hindy’ was one of the best.

They don’t call him ‘Slammin’ Sam’ just for the sake of alliteration.

Since arriving Down Under in 2010, Burgess has forged a reputation as one of the greatest British imports of all time, thanks to a combination of utter fearlessness – regardless of who it may be coming at him – and a work ethic which allows him to often play the full 80 minutes while topping yardage and tackle counts.

Burgess will forever be remembered for his heroics in the 2014 NRL Grand Final, which saw him play on after breaking his cheekbone in the opening seconds, and since then there have been multiple other examples of his bravery on a rugby league field.

The ever present rugged labourer in Brisbane Broncos teams full of stars, Webcke did the tough stuff and did it incredibly well.

Voted the best front-rower in the NRL for three-straight years at the turn of the century, Webcke was a must have in Queensland teams through that period and appeared in every single game the Maroons played between 1998 and 2004. A tireless worker, he dented the line with meaning, and his 110kg-plus frame, and comparatively short stature, made tacking him akin to taking down a fridge on wheels.

Webcke won three NRL Premierships – taking the field in the 2000 decider with a broken arm, and to this day is regarded by many as the only man who can challenge Glenn Lazarus and Arthur Beetson for the honour of being Australia’s best post-war prop.

The best ball-carrying forward the NRL has ever seen.

While some big boppers might be able to match Taumalolo’s destructive brilliance a couple of times a year, the Auckland-born lock does it every single week, and even in a North Queensland Cowboys team which also contains Johnathan Thurston and Michael Morgan, is likely the player who keeps opposition coaches awake at night. In 2017 Taumalolo ran for almost 800 metres more than his nearest rival in the NRL, Paul Gallen, despite carrying the ball only four times more than the Cronulla Sharks’ skipper, averaging 11 metres every time he ran the ball.

The scary part is Taumalolo is only 24 and has been getting better every year, these days averaging more than 200 metres a game and often hitting the 300-metre mark. Not many forwards are can claim to be legitimate game changers, but as Taumalolo has proved for both club and country, once he gets going there’s few better players in the world. 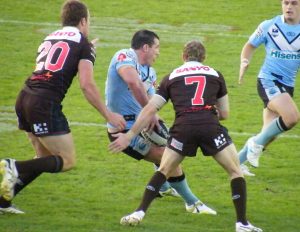 Paul Gallen in action for the Cronulla Sharks // Image: Naparazzi

Every year at the start of pre-season Paul Gallen laughs in the face of Father Time, and then goes back to his day job of being one of the best middle forwards in the NRL.

At 36 years of age, following a season where he ran for more than 4300 metres (second-most in the NRL) and flung away 53 offloads (fourth-most in the NRL), he beat Jason Taumalolo, 12 years his junior, to win the Dally M Lock of the Year gong for the second time, adding it to his collection of three international positional awards. Since making his NRL debut in 2001, Gallen has carried the Steeden for over 48kms, and is just the 11th player to appear in 300 games for a single club.

Not just a worker, Gallen has the skill to play at the line and is a prolific offloader. He will leave a huge hole at Cronulla when he eventually hangs up the boots.

Not just the best forward of the NRL era, but one of the greatest Australian players ever to lace up a boot.

The fact that Smith, who stands at only 185cm and has played at around 90kgs for the majority of his career, has managed to survive and prosper while tackling front-rowers and locks up to 30kgs heavier than him, says everything about his toughness. A hard-worker in defence, regularly hitting 40 tackles a game, Smith is an economical player with mistakes few and far between. In attack his brilliance really comes through, and in 2017 he set up 13 tries and 16 line breaks, while finishing as the competition’s equal best goal kicker.

Since 2006 his dominance in Dally M Hooker of the Year voting is such that there is a strong case to just name the award after him, and on a team level Smith has captained the Melbourne Storm, Maroons and Kangaroos to victory on the biggest stages. A one-of-a-kind player.