10 of the Best Indigenous Rugby League Players of All Time

There have been many brilliant indigenous rugby league players throughout the game’s history, but none better than these 10 stars.

One of the most prolific wingers of the NRL era, the ‘Tingha Tornado’ was voted the best in his position for three consecutive seasons between 1999 and 2001.

Blacklock crossed for 121 tries in 145 top-flight Australian appearances, before finishing up at Hull FC in the Super League with 35 in 51 games.

Desperately unlucky not to win the 1999 Grand Final with the Dragons – a game in which he scored yet another try – Blacklock’s career highlights include two caps for Australia in 2001 and winning the UK’s Challenge Cup in 2005.

Despite being far-and-away the best winger in the competition from 1999 until 2001- a period in which he also topped the NRL in tries scored for three consecutive seasons – Blacklock was never selected to play for NSW in State of Origin because of perceived deficiencies in his defence.

The trailblazer for Indigenous players at the highest level of the game, Morgan was the first Indigenous Australian to represent his country back in 1960.

A double in his Test debut against France in the second match of their 1960 tour of Australia left no questions surrounding Morgan’s selection, and later that year the Queensland winger represented the Kangaroos at the World Cup, playing on the opposite wing to the legendary Ken Irvine in a team which also included Reg Gasnier, Harry Wells and John Raper.

Despite enjoying success for both country and state, Morgan at times had to play through vicious racism. He was twice hospitalised for what he believed to be racially-fuelled attacks on the field, once being punched by a spectator and on a separate occasion because of an assault from his opposition in an off-the-ball incident.

Famously, after kicking the winning goal for Queensland against NSW at the SCG, Morgan had a full stubby launched at him from the crowd.

In 13 appearances for his state Morgan never played a match where he didn’t score a point, notching 13 tries and kicking 17 goals for Queensland. This incredible records underscores why he is considered among the greatest aboriginal rugby league players of all time.

The Raging Bull terrorised opposing players for 13 seasons, forging a reputation for his aggressive style on both sides of the ball.

Tallis won a Super League title with the Broncos in 1997, along with NRL Premierships in 1998 and 2000, winning the Clive Churchill Medal as best on ground in the ‘98 decider.

At representative level Tallis won the 2000 Rugby League World Cup with the Kangaroos, and finished his 16-Test career having scored nine tries and lost just one game.

While Tallis fielded questions about his ancestry all through his career, he is of Torres Strait Island descent and father Wally was a member of the first indigenous side to go on a tour (travelling around New Zealand) in 1973.

At the very start of his professional career in 1992 Tallis played for famed Indigenous side the Redfern All Blacks, winning the Aboriginal and Torres Strait Islander tournament alongside players such as Anthony Mundine and Wes Patten.

Like several members on this list, Tallis was included in the Indigenous Team of the Century named in 2007.

A try-scoring machine across 11 seasons with the Broncos, Renouf had blistering pace on the league field which made him near impossible to stop once into open space.

An athletic freak, Renouf also understood the finer details of centre play, which allowed him to get in the right places to take advantage of the work done by a Brisbane side who were unmatched in terms of talent at that time.

A record of 185 tries in 242 games at club level in Australia and England says it all, while Renouf also won Premierships in 1992, ‘93, ‘97 and ‘98, scoring three tries on his way to a Man of the Match performance in the ‘97 defeat of the Cronulla Sharks.

At international level Renouf averaged a try per game in his 11 appearances for Australia. 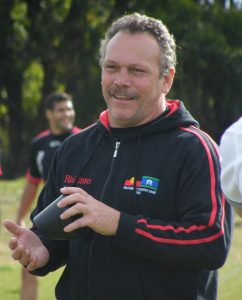 An old-school throwback who managed to make it work through the dawn of professionalism in rugby league, Lyons appeared in 332 Australian club matches across a 15-season career.

An unorthodox player known for his weaving runs which would so often bamboozle defenders, Lyons was also an excellent support player, setting up and scoring countless tries by putting himself in the right positions.

He was at the peak of his powers in 1990, winning the Dally M Player of the Year and helping the Kangaroos to a come-from-behind victory over Great Britain in the 1990 Ashes Series, playing in the halves alongside Ricky Stuart.

Despite being a smoker through most of his career, Lyons displayed impressive longevity and even in his 300th game set up six tries for Manly against Western Suburbs.

Lyons captained an Aboriginal ‘Dream Team’ in the 1996 rugby league sevens competition and is regarded as one of the finest Indigenous players of all time.

An athletic marvel who will go down as one of the game’s best backs, Greg Inglis’s entry into the professional ranks in the mid 2000s coincided with an era of dominance for his Melbourne Storm and Queensland Maroons sides. 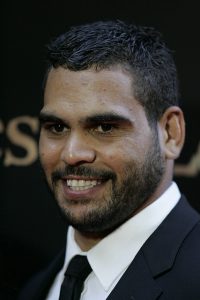 Built like a powerhouse back-rower, runs like a greyhound and fends defenders away as if they were never really there, he is a try-scorer and playmaker of elite calibre.

In a testament to his versatility, Inglis, who has Dunghutti heritage, has won Dally M best in position awards as both a five-eighth and fullback, and starred as a centre and winger for club, state and country over the years.

Inglis claimed Premierships with the Storm in 2007 and 2009 – which were later stripped due to salary cap breaches – before helping South Sydney to break a 43-year Premiership drought in 2014, scoring a try in a 30-6 victory.

Since debuting for the Maroons in 2006 Inglis has lost only one State of Origin series, while he has 18 tries in 30 appearances for Queensland.

One of the finest goalkickers and exponents of the field goal that the game has ever seen, Eric Simms managed to stand out in an era of brilliance for the South Sydney Rabbitohs.

Born and raised in Karuah in the Hunter region, Simms went on to become a talented fullback or centre who would win four Premierships with South Sydney between 1967-1971, playing alongside the likes of Rabbitohs’ legends John Sattler, Bob McCarthy and Ron Coote.

Simms honed his craft under the guidance of immortal fullback Clive Churchill, who was his coach at the Rabbitohs.

During a time when field goals were still worth two points Simms was prolific, booting 29 in a single season in 1968 and following it up with 19 and 20 over the next two years. Across his career he kicked 86 field goals and 803 goals, and to this day he is South Sydney’s highest points scorer with 1,841.

Such was his ability to boot field goals, Simms is indirectly linked to the NSWRL’s decision to make drop goals worth only one point rather than two.

He was just the fourth aboriginal rugby league player to be selected for Australia, and in the green and gold Simms won World Cups in 1968 and 1970. He notably scored 50 points across four games in ‘68 and played a lead role in the 47-11 demolition of the Kiwis in ‘70, scoring a try, kicking a field goal and booting nine goals from 10 attempts.

A three-time Premiership winner and a recipient of the Dally M Medal, Daley was one of Indigenous rugby league’s best players and now arguably their most-accomplished coach.

Daley was one of the leading figures in a period of dominance for the Canberra Raiders through the late 1980s and early 1990s, establishing himself as arguably the best five-eighth of that decade.

A versatile player who was just as comfortable in the centres, Daley scored 87 tries across his 244 first-grade matches, finishing his career with an impressive average winning percentage of 63.9.

He was at his peak through the 1995 season, being named both the Dally M Medal winner and Rugby League Week Player of the Year.

Post-playing days he has coached NSW Country, the Prime Minister’s XIII and is the current coach of NSW and the Indigenous All Stars.

If Johnathan Thurston doesn’t finish his career as the greatest Australian halfback of all time, it’s almost certain he will be second on that list with a country mile between himself and the nearest challenger.

A tenacious competitor who has combined God-given talents with a tireless commitment to work, resulting in a career which has seen him win everything there is to be won on the international and State of Origin stage, along with an NRL Premiership in 2015.

Four times voted the Dally M Player of the Year, Thurston has appeared on 37 occasions for Australia to date and spearheaded the most-successful period on record for the Maroons, playing a vital role as Queensland have won 10 of the 12 series he has played in since his debut in 2005.

The Souths Sunnybank junior holds the record for the most consecutive State of Origin matches (35) and most points (214).

Thurston has also been a key driver of the Indigenous All Stars concept in more recent years, captaining the side in five of their six games since the inception of the concept in 2010.

He is undoubtedly one of the finest aboriginal rugby league players of all time and many would argue he is simply the best player to have ever laced a boot.

The first Indigenous player to be recognised as the very best in Australia, Beetson was one of the greatest forwards ever to play rugby league.

A brilliant attacking forward, he wasn’t just about throwing his sizeable frame into opposing defensive lines; Big Artie could pass and offload with the best of them, and then outrun them as well.

He is believed to be the first aboriginal or indigenous athlete to captain Australia in any sport when he assumed leadership of the Kangaroos during their 1973 tour of France.

Consecutive Premierships with Eastern Suburbs in 1974 and ‘75, along with World Cup triumphs in 1968, ‘75 and ‘77 gave Beetson an almost unmatched rugby league CV, while he is widely credited for giving credibility to the birth of State of Origin.

Beetson, who died in 2011, is the prop forward in the Queensland, Indigenous and Australian Teams of the Century, and is a figure held in the highest regard to this day.