In rugby league’s first half-century, Australian fans, clubs and administrators became accustomed to seeing many of their finest players lured to the Northern Hemisphere. England’s fields were treated to the best years of the careers of luminaries such as Harry Bath, Brian Bevan, Lionel Cooper and Arthur Clues.

But the tide began to turn with the advent of poker machines in licensed leagues clubs in the 1960s, finally providing Sydney’s teams with a cash cow capable of competing with Britain’s big-spending clubs.

The flow of playing talent from Australia to England was stemmed to a trickle, and a steady trail of British players began to venture Down Under, peaking with the import heyday of the 1970s. After subsequent transfer bans were lifted in the 1980s, several modern greats made unforgettable cameos during the northern summer, while the last decade has seen Englishmen play an increasingly important role at NRL clubs.

Trimming the long list of imports down to the best 10 was a tricky task – there was no place for 1970s guns such as Cronulla enforcer Cliff Watson, Manly premiership winner Phil Lowe, and high-profile Penrith duo Mike Stephenson and the irreverent genius Bill Ashurst.

It was equally painful to leave half-season mercenaries Garry Schofield (Balmain and Wests), Kevin Ward (Manly), Joe Lydon (Easts), Martin Offiah (Easts and St George) and Jonathan Davies (Canterbury and North Queensland) out, such was the colour they added to the competition in the late-1980s and early-1990s.

Newcastle fans will fondly remember Irish and Great Britain Test winger Brian Carney’s one-season stay in 2006. Gareth Widdop may well have squeezed his way into this list if not for a subpar 2016 campaign for the Dragons; the same could be said for South Sydney twins George and Tom Burgess.

Meanwhile, there seems little doubt Canberra hooker Josh Hodgson will command a place in the top five within a couple of seasons – and fellow Raider Elliot Whitehead may end up joining him.

A 200-game stalwart and former Man of Steel winner for St Helens, Graham’s five seasons at Canterbury have been nothing if not eventful. He helped transform the Bulldogs into a force again upon his arrival in 2012, laying the front-row platform for the club to claim the minor premiership with his irresistible blend of toughness, thirst for work and brilliant ball-playing – but his campaign was tainted by biting Billy Slater’s ear in the grand final loss to Melbourne, costing him a 12-match ban. The passionate Graham bounced back, however, and skippered the Bulldogs in the 2014 grand final (in Michael Ennis’ absence) after collecting Dally M Prop of the Year honours. Further on-field outbursts have arguably hurt his reputation, but he remains one of the NRL’s most valuable and smart forwards. 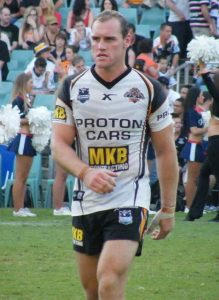 Veteran Wakefield Trinity and Leeds backrower Gareth Ellis was a magnificent acquisition for the Wests Tigers in 2009. The imposing, tough and mobile forward was named the Tigers’ Player of the Year in three straight seasons and was integral to the club’s return to the finals in 2010-11. Ellis was plagued by injuries in 2012 as the Tigers missed the eight, returning to England at the end of the year after 75 NRL appearances.

Prolific pointscoring hooker John Gray, credited with introducing the around-the-corner goalkicking style to Australia, played 138 games and scored 611 points for Norths and Manly – both long-standing records for a British player. He joined the Bears in 1975, but was poached by archrivals Manly three years later. Often used as a prop by the Sea Eagles due to the presence of Max Krilich, Gray was ruled out of the ’78 grand final by suspension. The moustachioed rake returned to Norths in 1981 and won the Dally M Hooker of the Year award in ’82 after helping the club to its first finals series in 17 years.

A second-row destroyer for Great Britain on the 1958 and ’62 Lions tours of Australia, Huddart was recruited by eight-time premiers St George in 1964. The St Helens via Whitehaven forward was ruled out of the Dragons’ 1964-65 grand final victories by injury, but he became the first Brit to win a Sydney premiership in ’66, scoring a try in the 23-4 decider win over Balmain – the last in the club’s world record run of 11 straight titles. An outstanding defender and a dangerous, mobile ball-runner, Huddart stayed with the Saints until 1968, finishing with 78 first-grade appearances before joining Newcastle club Macquarie United.

‘The Black Pearl’s’ performances as a centre in Balmain’s miraculous sudden-death run to the 1988 Grand Final holds a treasured place in premiership folklore. The aristocratic Wigan and Great Britain captain scored tries in four straight matches as the Tigers progressed from a fifth-place playoff to the decider. His groggy exit from the grand final courtesy of a controversial Terry Lamb tackle effectively sealed Balmain’s fate against Canterbury. Hanley starred during a 13-game stint with battlers Wests the following season, while he returned to the Tigers as a 35-year-old, proving he had lost speed but little of his guile in 26 games during 1996-97.

Dave Bolton toured Australia twice with the Lions before returning in 1965 to play for Balmain. A wily half and one of the premiership’s foremost field-goal exponents, Bolton played in the Tigers side which upset Great Britain in ’66 and lost the grand final to St George later that season. At age 32, he played a pivotal role in Balmain’s monumental grand final upset of Souths in 1969, slotting two field goals and steering the rank outsiders around the park superbly in the 11-2 triumph. Bolton retired at the end of 1970 after 78 appearances, while he later had an unsuccessful stint as coach of Parramatta.

Fiery 15-Test veteran Tommy Bishop turned the struggling young Cronulla Sharks into premiership contenders in the early-1970s. The gifted halfback joined the club in 1969 and took over as captain-coach the following season, winning the 1970 Rugby League Week Player of the Year award. He gradually led the Sharks up the ladder, culminating in their maiden finals series in ’73. Cronulla progressed to the grand final, where Bishop was regarded as one of the main instigators of the infamous violence which plagued the match, won 10-7 by Manly. He was unable to come to terms with the club for the following season, however, and joined Brisbane Norths after 69 appearances for the Sharks.

Former Leeds enforcer Adrian Morley spent the equivalent of an entire NRL season on the sidelines through regular suspensions, but the prop/second-rower’s aggression and fearless play on both sides of ball were vital ingredients to the Sydney Roosters’ success in the early-2000s. Morley played 113 games in six seasons for the Tricolours, starring in the 2002 premiership triumph and appearing in three straight grand finals. A seven-week kneeing suspension prematurely ended his NRL tenure in 2006.

Eager to test himself in the best competition in the world, dynamic Bradford forward Sam Burgess was a marquee acquisition for Souths in 2010. The 21-year-old made an immediate impact, stamping himself as one of the NRL’s top forwards in the ensuing four seasons with his bone-rattling defence, tackle-busting runs and all-round game-breaking qualities. Burgess, who was later joined at the club by three of his brothers, was a key figure in Souths reaching the preliminary final stage in 2012-13, but it was the club’s 2014 premiership success that sealed his place in NRL folklore. After picking up the Dally M Lock of the Year gong and finishing third in the overall medal count, Burgess inspired Souths to their first title in 43 years with Churchill Medal-winning display in the grand final despite suffering a broken cheekbone in the opening minute of the match. Following his ill-fated rugby union stint in 2015, Burgess returned to the Rabbitohs and was named their player of the year in 2016, as well as passing the 100-game mark for the club.

Brutal and brilliant Castleford lock Mal Reilly’s intimidation factor and ball-playing class provided Manly with the edge it needed to break through for belated premiership success. He played 89 games for the Sea Eagles from 1971-75, featuring in the club’s 1972-73 grand final victories – Manly’s first after 25 fruitless seasons in the competition. Reilly’s heavy-handed tactics ensured he was always a controversial figure in Sydney, but his attacking qualities were indisputable. He returned to Australia two decades later as coach of Newcastle, guiding the club to its maiden premiership in 1997.