The Gold Coast Titans are the youngest club in the NRL, having entered the competition in 2007.

The Gold Coast region does have a prior history in the NSWRL/ARL, though, with the Gold Coast-Tweed Giants being admitted into the NSWRL competition in 1988 alongside the Brisbane Broncos. The Giants had a chequered history, including name and ownership changes to the Gold Coast Seagulls and finally the Gold Coast Chargers, before that club was wound up at the end of the 1998 season.

The highlight of the Gold Coast’s eleven seasons in the NSWRL/ARL was reaching the semi-finals of the ARL competition in 1997, when the competition was split in two during the Super League war.

After the Chargers folded, it was eight long seasons before the Titans were born and top level rugby league returned to the Gold Coast.

Even though the Titans have only been in the NRL for just over a decade, plenty of great players have helped to establish the club. They have made the semi-finals three times in their brief history, with their best season being 2010 when they finished one win away from the grand final.

One player who could count himself very unlucky to miss out on the all-time greatest team I’ve chosen is Mark Minichiello, a foundation player who who still holds the record for the most number of games for the Titans.

Of the current Gold Coast squad, players like Ryan James, Ash Taylor, Nathan Peats, Jarryd Hayne, Jarrad Wallace and Kevin Proctor will likely be pushing for spots in a future all-time greatest Titans team if they stay with the club.

For now, I’ve selected players who have had more impact and/or longevity with the club in its short history. The stats listed for each player only reflect their matches for the Gold Coast Titans, not for any other club or rep team.

One of the most popular players in recent decades, pint-sized Preston Campbell was an important foundation player for the Gold Coast Titans. He was an experienced NRL campaigner by that stage, having a Dally M Player of the Year Medal and to show for his time at Cronulla and a premiership ring from his Penrith years. He unleashed his skill and speed for the Titans over five seasons, playing mainly at fullback but also filling in as a half when needed. Campbell brought fans through the turnstiles and was crucial to the Titans’ early success.

Kevin ‘Flash’ Gordon had electrifying pace and made his first grade debut for the Titans when he was just 19. He was the leading try scorer in his first two seasons, with the Titans making the semi-finals in both of those years. Injuries ultimately hampered and cut short his career, but there’s no denying the impact he had in attack and his ability to find the try line when he was fully fit.

‘Jimmy the Jet’ only had two seasons with the Titans before he controversially left the club to join the Broncos, but he is one of only two players in Titans history to win a Dally M award as the best player in their position over an NRL season (the other being Nate Myles). 2015 was Roberts’ breakthrough year, when he used his sizzling pace to score 16 tries for the Gold Coast.

Josh Hoffman was signed by the Titans from the Broncos and he spent a large portion of his two seasons on the Gold Coast in the centres. He’s a hard running, attacking player who always poses a threat for opposition defences. His versatility in being able to play several positions in the backline helped the rebuilding Titans to the semi-finals in 2016, before he departed for the Eels.

David Mead is the Titans’ all-time leading try scorer. He played primarily on the wing but also at fullback for the Gold Coast, with his pace and finishing ability over eight seasons making him a fan favourite. He was also an inspiration in his homeland of Papua New Guinea, returning to play for the Kumuls in Test matches and captaining them in their upset victory over Fiji in 2016.

Mat Rogers joined the Titans as a foundation player in his comeback to rugby league after playing 45 Tests for the Wallabies in rugby union. It was a perfect fit, with Rogers having grown up on the Gold Coast. His versatility allowed him to form a creative halves combination with Scott Prince, and he showed that he’d lost none of his attacking flair when he finished his comeback season as the Titans’ equal leading try scorer. Rogers was also named on the wing in our greatest Cronulla Sharks XIII.

Scott Prince was the Gold Coast’s inaugural co-captain in 2007 (with prop Luke Bailey), after he accepted a lucrative offer to leave the Wests Tigers (who he’d led to a premiership in 2005). He was a marquee signing who helped establish the credibility of the Titans and attract other players to the club for their debut season. Prince starred for the Titans, using his silky skills to guide the club to multiple finals appearances. He remains the Gold Coast’s leading all-time point scorer. 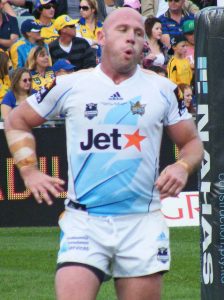 Luke Bailey was an inspirational leader for the Gold Coast Titans

Luke ‘Bull’ Bailey was the Gold Coast’s undisputed forward leader during his eight seasons with the club. He was an established State of Origin player when he signed on as co-captain for the Titans’ debut season, and went on to win the club’s Player of the Year award three times. No other Titan has won that award more than once in their eleven year history. Bailey was a tough, consistent prop with a high work rate, going about his business in the middle of the ruck with a minimum of fuss.

Nathan Friend was a durable and often underrated hooker who was always busy in both attack and defence. He was the Titans’ Player of the Year in 2009 when they made the semi-finals for the first time. The club showed how highly they valued his leadership, both on and off the field, when they re-signed him for a farewell season in 2016 at the age of 35, after he’d spent four seasons with the Warriors. The Titans surprised many by making the semi-finals that season for the first time since 2010.

Nate Myles joined the Titans in the 2012 and had arguably the best season of his career, winning the Dally M Second Rower of the Year, the Gold Coast Titans Player of the Year and the Wally Lewis Medal as Queensland’s best player in their seventh consecutive Origin series win. He was named Titans’ co-captain (with Greg Bird) the following season, and alternated between second row and prop for the next three seasons. I’ve taken advantage of that versatility to select him at prop in this all-time greatest team.

After playing with Scott Prince in the Wests Tigers premiership team of 2005, Anthony Laffranchi
joined the Titans along with his captain as a foundation player in 2007. He became a State of Origin and Test player during his time on the Gold Coast, with his try-scoring ability and combination with Prince being invaluable for their attack.

Greg Bird was a player that opposition fans loved to hate, whether he was playing club football or for New South Wales or Australia. But there was no denying his ball-playing ability, rugged defence and overall toughness. His on-field leadership was acknowledged when he was made co-captain of the Titans along with Nate Myles in 2013 (though he later lost that role due to off-field indiscretions).

Ashley Harrison was a quiet achiever in rugby league. He rarely played a bad game at club level or for Queensland in State of Origin, but he didn’t get many headlines for his tradesman-like work in the back row. Teammates, though, knew Harrison’s value and he was an outstanding performer for the Titans across seven seasons. His versatility was also an asset for the club, with the ability to fill in at five-eighth and be a ball distributor when necessary.

So that’s my opinion for the Gold Coats Titans’ all-time greatest team. What are your thoughts and how do you think they would go against our other best-ever lineups?