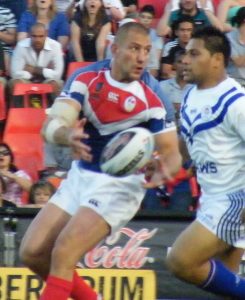 A towering prop offering a throwback to the unpredictable French style of the 1950s, front-rower Guisset was just as talented and unpredictable as he was tough.

A durable worker who played for leading Super League clubs Wigan and Warrington, Guisset was also a noted try-scorer for his position, scoring four-pointers in more than 10 per cent of his 304 career club games.

After starting his career in the south of France with Saint-Esteve XIII, the 1.8-metre Guisset would experience success from a young age, helping them to French Championship titles in 1996-97 and 1997-98 before he had even turned 20.

A stint with the Canberra Raiders in 1999 saw him make four appearances, before he returned to Europe to carve a reputation as one of the Super League’s best forwards.

He represented Les Chanticleers at both the 2000 and 2008 Rugby League World Cups and remains involved in the game today as the coach of Catalans Dragons reserve team.

The all-time leading try-scorer for France, with 25 four-pointers across his career, Contrastin is one of nine Frenchman in the International Rugby League Hall of Fame.

So often the beneficiary of the beautiful and open style of league played by the French through the 1950s, Contrastin has the rare distinction of having scored Test doubles against Australia, New Zealand and Great Britain.

He was near untouchable in the third Test of the 1951 tour of Australia, scoring twice and causing endless headaches for the Kangaroo’s backline in front of over 60,000 at the SCG.

Not just a prolific scorer, Contrastin will also be remembered for his impressive longevity for that era, surviving to play across 10 seasons for his nation. 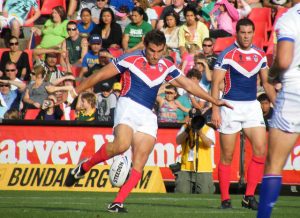 Dynamic French half Thomas Bosc puts through a kick during the 2008 World Cup.

The entry of the Catalans Dragons into the Super League was the most significant event to occur in modern French rugby league, and at the forefront of that since day one has been local lad Bosc.

The club’s all-time leading points scorer, Bosc has for the past decade been one of the best French players in the world, and even as he heads towards his 34th birthday is a consistent performer for the Dragons.

A creative player capable of playing across fullback, wing, five-eighth or halfback, Bosc scored 58 points in 15 Tests for France, representing them at both the 2008 and 2013 Rugby League World Cups.

Through a period where France haven’t looked like challenging New Zealand, Australia or England, Bosc has been a shining light.

A versatile player with a skillset to fit any position in the backline, Benausse was used as a centre, five-eighth and halfback at different stages of his 14-season international career.

In 31 Tests he was often tasked with marking up against some of the very best players of this generation, and perhaps all time, holding his own against the likes of Reg Gasnier (Australia), Roger Bailey (New Zealand) and Eric Ashton (Great Britain).

Benausse played a key role as France enjoyed three-straight Test victories over Australia between 1953-54, for the first and to date only time in their history, while also being involved in the three consecutive Test series triumphs over the Kangaroos in 1951, ‘53 and ‘55.

In the twilight of his career ‘Gijou’ as he was known to teammates, also played through France’s clean sweep of Great Britain in 1962, scoring two tries and kicking 14 goals across the three matches.

The man who established rugby league in France back in 1934, it was Galia who led the French through their first ever matches that year on a tour of England, after he was banned by the rugby union for alleged secret professionalism.

As the skipper of the team dubbed ‘Galia’s boys’ in 1935, he helped France to a 18-11 defeat of Wales in Bordeaux and a 15-all draw with England in Paris, in a result which signalled their intent on rugby league’s world stage.

A former boxing champion, Galia was an uncompromising figure on the field, where he played back row, prop and hooker, spearheading a French pack who quickly became known for their rugged style.

During his stints in both union and league Galia was widely regarded as the best French forward going around. 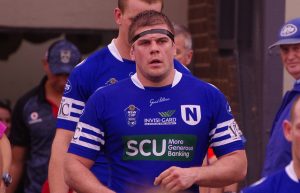 The current captain of both Les Tricolores and Catalans Dragons, Casty is the modern day French warrior.

He is the most recent example of a French player capable of making it in the NRL, where he played 11 games for the Sydney Roosters in 2014 before returning to his boyhood club Catalans Dragons.

Like Bosc, Casty was a founding member of Les Catalans, and with France a shadow of the team they used to be, it’s at club level where he has made his name.

A wrecking ball in attack and a punishing defender on the other side of the Steeden.

With over 200 Super League appearances under his belt, the 2011 French Player of the Year has consistently held his own while going head-to-head with the likes of Jamie Peacock, Adrian Morley and James Graham in Europe’s premier competition.

The Only French player in history to appear in three Rugby League World Cups (1954, 1957 and 1960), Merquey scored 15 tries in his 29 Tests and carved a reputation as a lethal attacking weapon.

A 5 foot 8 centre with a quick turn of pace, Merquey beat both Australia and New Zealand five times in his career.

After being made captain of Les Tricolores in 1955, he led them to a 2-1 series defeat of the Kangaroos, with his two tries proving the difference in a 29-28 win in the second Test at the Brisbane Cricket Ground.

Later that year Merquey was again at the forefront as France drew their Test series against New Zealand 1-1.

After France beat a Southern Division selection in Wollongong in 1957, Merquey was offered what is thought to be the biggest contract in the history of rugby league at the time.

The Illawarra Leagues Club put forward 7,000 pounds in an attempt to lure him to Australia to play in the region. He declined the offer and went on to represent the national team for another three seasons. 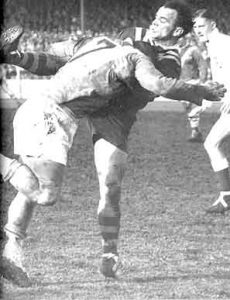 A dynamic running halfback or fullback, Dop made his Test debut against Australia in Marseille in 1949, but rose to fame as part of Les Chanticleers tour of Australasia two years later.

Dop was initially out of favour with selectors on the 1951 tour down under, considered a second-rate option in the No.7 jersey compared to Joseph Crespo.

But the perception of Dop transformed quickly after he starred in France’s upset defeat of the Kangaroos in the first Test at the SCG, silencing local critics who prior to the match had ridiculed the French for their laidback approach and apparent lack of desire on the field.

Small in stature, Dop was a showman who frequently brought crowds to their feet with his jinking carries and majestic movements on the ball

But while he created plenty of joy for onlookers, he also caused tempers to flare with his arrogant approach to the game. This came to a head on the New Zealand leg of the ‘51 trip, where while playing South Auckland Dop was struck by a spectator while attempting to retrieve a loose ball.

Dop was inducted into the International Rugby League Hall of Fame in 1988.

Widely regarded as the best second-rower ever to come out of France, Brousse was a giant of a man who had little issue with employing brutal tactics on a footy field.

Together with back-row partner Edouard Ponsinet he terrorised opposing teams through a period of dominance for Les Chanticleers in the early 1950s.

While the French sides of that time were best known for their open style and free running, Brousse brought a pure aggression which saw him reduce legendary figures such as Australia’s Clive Churchill back to mere mortals.

Standing at over six foot, Brousse was one of the main antagonists in France’s 2-1 series defeat of the Kangaroos in 1951, particularly in the third and deciding Test when he recovered from being knocked out early in the match to put in a devastating performance, which included a long-range try. 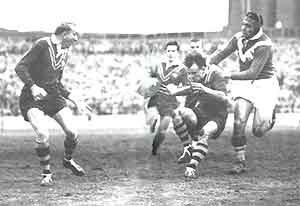 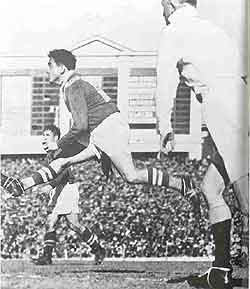 Where do you begin with a player whose place in rugby league folklore has been guaranteed thanks in equal parts to his brilliance and bizarre acts on the field.

Almost universally regarded as the greatest Frenchman to ever step onto a rugby league field, Aubert captained France in every single Test match he played and remains their most-capped player (46 appearances across all forms of the game) and highest points scorer with 361.

A stocky fullback who stood at just 5 foot 2, Puig had an incredible knack when it came to kicking the ball and was known for his monster punts and swerving kicks off the tee.

His unorthodox style in open play was one of the main reasons France emerged 2-1 winners in the 1951 tour of Australia, where he also kicked 18 goals from 18 attempts across the three Tests, prompting then Kangaroos halfback Keith Holman to state “I’ve never seen his equal.” Aubert turned out in 25 of his nation’s 29 games that tour.

But for all his talent Aubert was a polarizing figure. Known for being a chain smoker, even keeping cigarettes next to the goalposts and frequently lighting up mid-game, he was dubbed ‘Pipette’ by teammates as a result.

At half-time it wasn’t unusual to see Puig down a glass or two of red wine, while he would sometimes refuse to tackle players who got through to him in the last line of defence, claiming it wasn’t his job or that he was punishing his teammates for failing to tackle the player earlier.

The game will never see a player of his kind again.