The Best Players to Never Play State Of Origin

State of Origin selection time is a perennially controversial stage of the season on both sides of the border; the 2015 scramble for representative spots is shaping up to be as contentious as ever. There is an annual uproar over the players left out – and some of the unluckiest omissions are fated never to represent their state on the code’s biggest stage.

The list of the top 10 players never to play Origin football features some controversial omissions in itself, including Australian Test reps Aaron Raper, Daniel Gartner, Chris Lawrence, Russell Richardson, Andrew Walker and Joel Clinton. There was no room for any Queenslanders in the top 10, despite the likes of Billy Johnstone and Ben Barba failing to win favour with Maroons selectors. Other Blues contenders that were considered for this list include Danny Lee, Alan Tongue, Lance Thompson, Chris Heighington, John Skandalis, Luke Davico and Ian Russell.

Players who played the bulk of their careers prior to Origin’s introduction in 1980 and players still in contention for an Origin debut were not considered.

Dogged by injuries throughout his career, outstanding five-eighth Mick Pattison was denied his opportunity in the Origin arena in 1981. The Parramatta junior debuted for the Eels in 1978, forging an impressive halves combination with Peter Sterling in the ensuing two seasons before joining South Sydney in 1981. Pattison was selected in the NSW side at five-eighth alongside Sterling for the one-off Origin match in his first season with the Rabbitohs, but he was forced out with injury. He represented City Firsts in 1982 (again with Sterling) but broke both collarbones in a tackle just weeks out from the Origin series. After rejoining Parramatta and making just four first grade appearances in 1983-84, Pattison finished his career with two seasons for Illawarra; he was one of the Steelers’ best as they collected the 1985-86 wooden spoons. 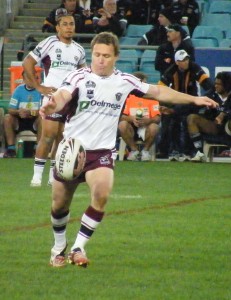 One of dominant halfbacks of the NRL era, Matt Orford was denied a NSW Origin appearance by injury. The Gosford product debuted for Northern Eagles in 2000 and joined Melbourne the following season, becoming established as a dynamic goalkicking No.7 with an impressive tryscoring strike-rate. Orford was called into the Blues’ squad for game two of the 2004 series when Brett Kimmorley was struck down with injury three days out from the game, but Orford was also ruled out with a calf complaint. The diminutive general joined Manly in 2006 and represented City Origin (after previous appearances in 2001 and ’04); he was considered as a replacement when Craig Gower was forced out of NSW’s series-opening side on match eve, but Brett Finch – who took his place in the Blues line-up in 2004 – was called up instead. Orford captained the Sea Eagles to the 2007 Grand Final (a 34-8 loss to Melbourne) and the led the club to an emphatic premiership victory in 2008 – courtesy of a 40-0 thrashing of the Storm in the decider – after winning the Dally M Medal. He linked with English club Bradford in 2010 before returning for an unsuccessful one-season stint with Canberra a year later at the age of 33. Orford remains one of just four eligible Dally M Player of the Year winners and one of only two premiership-winning captains since 1980 to not play Origin football. 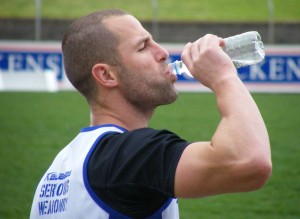 ‘The General’ was a durable, brave and skilful fullback with the attacking chops to bring up a century of tries in a 13-year first grade career. Patten debuted for Illawarra in 1998 and was a teenage fullback in St George Illawarra’s Grand Final loss a year later, before becoming one of Canterbury’s greatest clubmen with 225 appearances – including a premiership triumph in 2004 – over 10 seasons, twice winning the Bulldogs’ Player of the Year honour. A wonderful custodian in an era of unprecedented No.1 talent, the three-time Country Origin rep’s NSW ambitions were thwarted by the likes of Mark Hughes, Brett Hodgson, Anthony Minichiello, Brett Stewart and Kurt Gidley. Patten was the Blues’ 18th man for the third match of the 2009 series, while only John Morris (300) has played more than Patten’s 281 first grade games without attaining State of Origin honours.

A veteran of 206 games for South Sydney from 1982-92, cheeky halfback Craig Coleman was the linchpin of the club’s 1984, ’86-87 and ’89 finals campaigns, but couldn’t catch a break from the rep selectors. A scheming playmaker with a tongue just as sharp, the irrepressible ‘Tugger’ was kept out of the state side by Steve Mortimer, Peter Sterling and Des Hasler for the bulk of the 1980s. Coleman seemed a good chance of a belated call-up as he steered the Rabbitohs to the top of the table in 1989, but the versatile Hasler and Greg Alexander were preferred by the Blues, who were duly spanked 3-0 by a rampant Queensland outfit. Coleman finished his career in 1996 with 266 games to his credit after stints with Gold Coast and Western Suburbs.

A skilful, ball-playing hooker with outstanding vision in the Ben Elias-mould, St George stalwart Nathan Brown was unfortunate to star during an era when converted halfbacks were thrust into the NSW No.9 jumper. The blonde-haired rake played in losing Grand Finals for the Dragons in 1993, ’96 and ’99, but Brown’s 172-game career was cut short when he was just 27 after suffering a neck injury during the 2001 pre-season. One of the competition’s most influential players during the late-1990s, Brown was kept out of the Blues’ line-up by premiership-winning No.7s Andrew Johns, Geoff Toovey and Craig Gower.

Penrith lock Col Van der Voort ranks as one of the game’s unluckiest players injury-wise, regularly robbed of his opportunity to achieve higher honours. The consistent, hardworking backrower debuted for the Panthers in 1986 and was a key figure in their rise to contender status in the late-1980s, representing City Firsts and winning the club’s Player of the Year award in 1989. A knee injury ruled him out of Penrith’s maiden Grand Final appearance and a possible Kangaroo Tour call-up in 1990. Van der Voort made his City Origin debut in 1991 and was selected on the NSW bench for the series opener, but was forced to withdraw due to injury. He represented City Origin again in 1992 but made just six first grade appearances in the ensuing two seasons and retired at the end of 1994, aged 29. 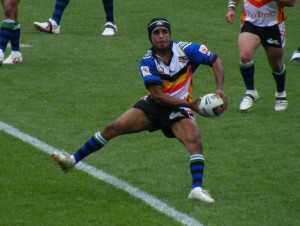 Dynamic, versatile and courageous, Preston Campbell was a victim of Blues selectors’ notorious reticence to pick small players. The diminutive livewire won the 2001 Dally M Medal as a Cronulla halfback, was a driving force behind Penrith’s 2003 premiership triumph at five-eighth, and was a constant inspiration for the Gold Coast Titans, predominantly from fullback. Good enough to represent Country Origin three times, the 167cm Inverell product scored 86 tries and 903 points in 268 first grade games from 1998-2011.

A tough, unassuming prop with a majestic offload, Darren Britt holds the dubious distinction of having made the most Test appearances without playing Origin football in the post-1980 era. The Orange product made his first grade debut with Western Suburbs in 1989, but his career took off after joining Canterbury in 1994, winning a premiership with the club the following season. Britt’s leadership in captaining Canterbury to the 1998 NRL Grand Final after finishing the regular season in ninth spot saw him chosen to make his Test debut at the age of 29, playing both post-season Tests against New Zealand. He featured in all three matches of Australia’s victorious Tri-Nations campaign the following season and was part of the green-and-golds’ World Cup final-winning squad in 2000. Britt joined Super League club St Helens at the end of 2001, leaving behind a record of nine Tests, but no Origin appearances. Front-rowers chosen for NSW ahead of Britt during his representative heyday of 1998-2000 included Rodney Howe, Robbie Kearns, Jason Stevens, Mark Carroll, Paul Harragon and Glenn Lazarus.

Brilliant winger Nathan Blacklock was one of the greatest try-scorers and entertainers of the modern era but was continually overlooked for representative sides and ranks as one of the most controversial non-selections in NSW’s Origin history. The Indigenous flyer debuted for Sydney City in 1995 but came to prominence in 1998 after scoring 20 tries for St George. Blacklock featured in St George Illawarra’s side that lost the 1999 Grand Final (scoring a memorable solo try), while he was named Dally M Winger of the Year and topped the NRL’s tryscoring chart in three successive seasons (1999-2001). After representing Country Origin and scoring 27 tries in 2001 (the equal-highest season total since 1954), Blacklock was selected in the Kangaroo Tour squad, scoring two tries and two goals on debut against Papua New Guinea and playing his only other Test in the Ashes decider at Wigan after injured ruled out Lote Tuqiri. But he could force his way into the NSW Origin line-up – the likes of Darren Albert, Matt Geyer, Adam MacDougall, Jamie Ainscough, Timana Tahu and Jason Moodie were preferred on the flanks from 1999-2002. Blacklock abruptly departed for a brief rugby union stint with the NSW Waratahs in 2002, but returned to the Dragons the following season and finished his career at the end of 2004 with the extraordinary record of 121 tries in 142 first grade games.

What do you think? Have we got it right?