Australia’s Most Significant Defeats or: Victories for International Rugby League

A loss for Australia is a victory for rugby league; it’s been that way for as long as I can remember and I can only hope that I see the end of it in my lifetime.

On Sunday at Suncorp Stadium, New Zealand defeated the green-and-golds 26-12. It was the first time in 61 years the Kiwis had been successful in three consecutive games against their cross-Tasman rivals and their first mid-season triumph in 18 seasons.

Rugby league would not have lost a single fan in Australia because of the result – the game is so big here that a successful national team is surplus to requirements – but would have gained plenty of converts in rugby union-crazy New Zealand. 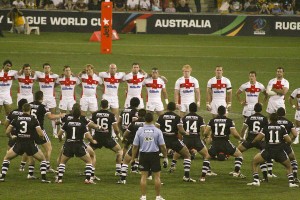 Similarly, the World Cup holders being beaten has emboldened English fans and made the post-season Kiwis tour of the UK inestimably easier to promote. They’ll be world number one by then. And, to outsiders, it gave international rugby league credibility – the team that won the World Cup final so convincingly two years ago being overturned by the side they beat.

My abiding childhood memories regarding the Kangaroos involved sitting up to watch the 1982 Invincibles in action, pausing the VHS machine to tape even the news bulletins. I still have those tapes somewhere…

Since then, it has been an agonising, glacial-speed road to competitiveness  for New Zealand, Great Britain and England – even though I have seen Wales and the United States lead Australia at halftime!

At first, the defeats were like hen’s teeth, but we have gotten to the point where, 29 years after the 1986 Unbeatables,  the green and gold colours have been lowered on three consecutive occasions. I wasn’t sure if I’d ever see that.

I have only missed the odd Australian Test live since the 1992 World Cup final – for which I was shattered to not be at Wembley. I’ve hardly missed a game played by England, Great Britain and New Zealand in that time either – travelling from Philadelphia, Orlando and Mt Hagan. But I wasn’t planning going to Brisbane when this Anzac Test was scheduled for Friday, due to a little austerity drive upon which I am embarking.

However, when it became the first Test in Australia to ever be postponed, I figured it was a sign from above. I was supposed to be there. So I used some frequent flyer points and made my way to Suncorp Stadium.

I rate New Zealand’s victory as an extremely important result. How important? Let’s find out as I rank Australia’s five most significant defeats that I’ve witnessed first-hand (I missed the 2010 Four Nations final and the 1990 Kangaroo Tour, so they have been excluded).

The first time Australia’s invincibility, after the fabled Kangaroo Tours of earlier that decade, was disproved. The Ashes were already wrapped up but an exciting combination of Shaun Edwards, Joe Lydon, Garry Schofield, Lee Crooks and the rest put an almighty punctuation mark in the game’s history books with a crushing win at the then-brand-new Sydney Football Stadium. The late Mike Gregory’s long-range try at the end will live in my memory forever. Things were changing – Australia would not ride roughshod over the rest of the world in quite the same way from now on.

British rugby league had been humbled on its own soil during the previous two Kangaroo Tours with the Australians light years ahead in terms of fitness and skill. But at Princes Park in Melbourne on a cold wet June evening, the green-and-golds ceased to be supermen. This was a career highlight for a generation of British stars, a five-tries-to-two flogging in front for 31,000 fans – of which many were from the north of England. Unlike our number five game, it tied the series – but Australia snuck home 16-10 in the final Test.

The final hurdle for New Zealand in becoming true peers for the Australians – winning the mid-season Test. They had started to steal victories, then titles. But while the World Cup would seem the biggest hurdle, coach Stephen Kearney knew that the real objective must be consistency. And without a host of in-form players, the Kiwis held a match-winning 26-6 lead at halftime. Australia coach Tim Sheens admitted afterwards that incumbency was over – like NSW and Queensland, the green and golds would now have to pick sides to win … not as a reward. There were no more excuses about injured or unavailable players. New Zealand are no.1.

Three years after ending Australia’s golden age, the Kiwis turned the knife by taking the World Cup off the Australians. The host nation had not lost a series at home since 1970 and had held the trophy since 1975. Wayne Bennett, interestingly, helped the New Zealanders on this occasion and there were tumultuous scenes afterwards as the Kiwis – who invented international rugby league 101 years before – won its biggest prize for the first time. Ricky Stuart abused referee Ashley Klein in the team hotel the next day and stood down.

This will not be eclipsed in my lifetime, not even if the green and golds lose a World Cup semi-final to Fiji. It had been 27 years since Australia had lost a series to anyone. They had seemed untouchable when it counted. Brian McClennan’s club coaching career did not go as well as he would have hoped, but no-one can take this away from him. I remember drinking in the Kiwis hotel afterwards – beer and kava from Ruben Wiki’s wooden bowl. Wayne Bennett took the back way out of the airport and was soon no longer the Australian coach.