Carl is 52, plays for Leeds Masters Rugby League Club and is a current Great Britain international.

Q: Masters Rugby League is growing quickly, but many in the broader rugby league community still don’t know much about it. Can you give us a brief summary of how the game works?

A: Masters is rugby league with adaptations made to ensure players of any age above 35 can play as long as they want to. Three sets of short colours are worn to denote age and the type of tackle that can be used:

If a player is injured, they can also play in gold shorts and a simple touch is required.

No more than two players  are allowed in a tackle. Kick offs and sixth tackle kicks are uncontested. No scores are kept, all games finish 0-0 (but in fairness you wouldn’t find many players who don’t keep score in their heads!). All players have a duty of care to make sure everybody is as injury free as possible. Other than that, it’s just rugby league, played at club and international level.

Q: How did you first get involved with your club, Leeds Masters?

A: Leeds Masters was formed by 5 local clubs (Farnley Falcons, who I played for, West Leeds, Milford Marlins, Stanningly and East Leeds) that, on the whole, had been struggling to put out full sides in games. The lads decided to merge and, since forming 18 months ago, the club has gone from strength to strength. We now host one of the five annual Master’s festivals. Our proudest moment was being awarded one of the Australian tourist games last year. It is a great club to play for with some great lads.

Q: How often do you play? When does the season run in the UK?

A: This season we decided to play as many games as possible, playing the majority of Masters teams either club vs club or at one of the festivals. The season used to run from May to September but is now virtually all year long.

Q: You represented Great Britain last year. What did that mean to you? What was the experience like?

A: It was a great honour to be selected to play for my country – the experience is something I will never forget. The players from that squad have become close friends, and the occasion was made that bit more special with my wife, Kath, as Great Britain manager and my eldest Daughter, Niamh, as touch judge. 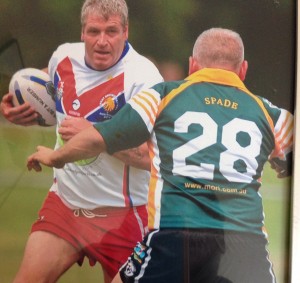 Q: It must be exciting to see how rapidly the Masters game has grown. How do you see it evolving over the next few years?

A: All the players are excited about Masters expanding. Not only is it played in the North but also the South, with clubs like Medway Dragons leading the way, and the masters steering group promoting the game in the midlands. The addition of new clubs can only be good for the game.

Q: What do you enjoy most about Masters rugby league?

A: On a personal level Masters has been an opportunity to form friendships with lads from all over the country. The social side of the game is a major part of what the rugby league is all about, and you won’t find many people more sociable than Master’s players.

Q: What’s your message to anyone thinking of getting involved in Masters rugby league?

A: Go along and watch a game – take your boots with you you’ll probably get a run – or go to a festival and you will get a feeling of what playing Masters is all about. A full list of clubs is available on the Masters website: www.mastersrl.co.uk

This Q & A is sponsored by Rugby League Network