Along with New Zealand’s comprehensive triumph and under-strength Australia’s disappointing campaign, Toa Samoa’s performances were the story of the recently completed Four Nations tournament. Leading both England and New Zealand inside the final quarter of thrilling Test matches in Brisbane and Whangarei respectively, Samoa were desperately unlucky not to win both clashes and claim a shock final berth with one round-robin match remaining. Although overpowered by the Kangaroos during the first half of their encounter in Wollongong, Samoa fought back gamely after the break and were far from disgraced in the 44-18 loss.

There were promising signs at last year’s World Cup for Samoa, producing a stirring second half fight-back against defending champs New Zealand and thrashing Papua New Guinea and France during the pool stage, before a disappointing quarter-final loss to Pacific archrivals Fiji. Samoa turned the tables on Fiji in May to emphatically secure a berth in the Four Nations – but few could have predicted how competitive they would be, especially after a pre-tournament nightclub brawl in Brisbane threatened to derail their build-up.

But can the code capitalise on Samoa’s watershed showing? Australia’s apathy to the international game – which has been in the doldrums for decades – is hampering progress, while there are myriad challenges that still confront Samoa in spite of their recent success.

Toa Samoa boasts some of the most talented and exciting players in the game, possessing excellent depth in the three-quarter line and in the forward pack departments – their production line of blockbusting backs and big, skilful forwards is remarkable.

The halves and hooker area, and to a lesser extent fullback, are areas Samoa has traditionally struggled to produce genuine top-liners. In saying that, the oft-maligned Ben Roberts played some of the best and most controlled football of his career during the Four Nations; Pita Godinet was magnificent attacking out of dummy-half; makeshift custodian Tim Simona was courageous and solid enough at the back after struggling under the high ball against England; and utility Kyle Stanley was as good as could be expected in the No.7 for a player that has started just three NRL games in the halves and has been plagued by serious injuries throughout his promising career.

But the unavoidable problem is that the elite players with Samoan heritage will, eventually, be snapped up by Australia or New Zealand. Anthony Milford debuted for Samoa last year and starred at the World Cup, but he rebuffed the chance to play for them in the Four Nations to focus on his pursuit of Queensland and Australia guernseys; Suaia Matagi, another World Cup revelation, was picked by Samoa and New Zealand, opting to don the black and white of the Kiwis.

Four Nations stars Josh McGuire and Tim Lafai have been earmarked as future Kangaroos and near-certain Origin selections, while Joey Leilua has already played for City and is regarded a fringe NSW candidate. Likewise, Tim Simona will be on the Kiwis’ radar in coming seasons. Winger Daniel Vidot almost spurned the chance to represent Samoa again due to the slim chance of winning a Maroons call-up.

Many bemoan this phenomenon – and the jumping to and fro between nations – but it is naively idealistic to argue for it to happen any other way. Firstly, most of these players were either born, or at least have spent most of their lives, in Australia or New Zealand. Then there’s the drastic payment discrepancy compared to playing for the Kangaroos (not to mention Origin) and Kiwis, along with the increased exposure and, arguably, greater prestige in being selected for one of the traditional heavyweights.

Tightening the eligibility rules further would only hurt Samoa – isn’t it better to have these young guns play for Samoa at the start of their burgeoning careers than not at all? The inflexibility in the rules in regards to emerging nations, it could be argued, should be relaxed to give nations like Samoa, Fiji, Papua New Guinea et al the opportunity to have their squads bolstered by elite talent if they happen to miss selection for the international superpowers.

On the plus side, many ex-superstars are putting their hand up for Samoa after their representative heyday has passed. Former Kangaroo Reni Maitua, and ex-Kiwis Frank Pritchard, David Fa’alogo and Ben Roberts, were key performers during the Four Nations. Tony Puletua and Iosia Soliola teamed up in Toa Samoa’s second-row during the World Cup after previously playing 21 and 11 Tests respectively for the Kiwis. It’s a pattern that goes right back to Samoa’s World Cup debut in 1995, when they enjoyed the services of veteran former All Blacks Va’aiga Tuigamala and John Schuster, and Kiwi reps Tony and Paddy Tuimavave, Tony Tatupu, Tea Ropati, Se’e Solomona, Sam Panapa and Mark Elia.

The harsh reality is Samoa’s best players will continue to get swiped by Australia and New Zealand, but the ever-increasing number of prominent NRL players with Samoan backgrounds will ensure the pool of talent is still big enough to select a competitive team. Tightening eligibility rules will only see emerging stars brush Samoa altogether.

Samoa’s rivalry with Tonga is set to be a highlight of international rugby league for years to come.

Samoa has never had any trouble attracting quality coaches to aid their cause. Legendary former New Zealand, Wigan and Manly mentor Graham Lowe led Samoa at the 1995 World Cup, ex-Kiwis and Sea Eagles star Darrell Williams helmed their campaign at the 2000 tournament, veteran coach John Ackland – whose impressive list of achievements was enhanced by taking the Warriors NYC team to two premierships – took them to the 2008 World Cup, and St George Illawarra’s Steve Price steered Samoa through the qualification process for the 2013 edition.

In Matt Parish, who coached them at last year’s World Cup, Toa Samoa have one of the best free agents on the market. A highly-respected assistant at NRL level and a key member of Laurie Daley’s NSW Origin staff, Parish is largely responsible for giving Samoa their new-found hard edge and ability to compete with the big boys.

Parish’s curt press conference demeanour – rather than agreeing with the widely-accepted line that Samoa had overachieved – is a reflection of his belief that his side were good enough to take down the international heavyweights, and that they would have if they’d been given a fair rub of the green by the match officials in their losses to England and New Zealand. He clearly cares deeply about the cause.

It seems inevitable, however, that Parish is headed for an NRL head coach gig at some point, and that his position as Samoa’s national coach may become untenable. But until that situation arises, Samoa will benefit from his undoubted skills, while Parish has laid a solid foundation for his eventual successor – a role that has taken on far greater prestige thanks to his efforts and the team’s recent performances.

The 15-a-side game has long ruled the hearts and minds of the majority of Samoans after the island nation’s watershed performances at the 1991 World Cup and quarter-final appearances at the ensuing two tournaments. Samoa’s participation in the limited international rugby league sphere was then in its sporadic infancy.

Manu Samoa, as the national rugby union side is known, faces many of the same challenges as their league counterparts, losing top-tier players to the All Blacks and the Wallabies, and struggling to get regular Tests against world rugby’s heavyweights.

But Samoan rugby is in crisis, with its administration – headed by Prime Minister Tuilaepa Aiono Ailele Malielegaoi – at loggerheads with the playing group, who have accused the powers that be of administrative bungling, selection interference and a shambolic approach to finances and payments. The PM responded by calling the Samoan players “little brats”, while only fears of lifetime bans handed down by a crooked administration have stopped them from taking strike action.

Next year’s World Cup campaign is in tatters, while a historic Test against New Zealand on home soil is also under threat.

The debacle has coincided with Samoan rugby league’s unprecedented levels of success and popularity; if they capitalise on the situation intelligently, the 13-a-side code could realistically supersede union as Samoa’s sport of choice. 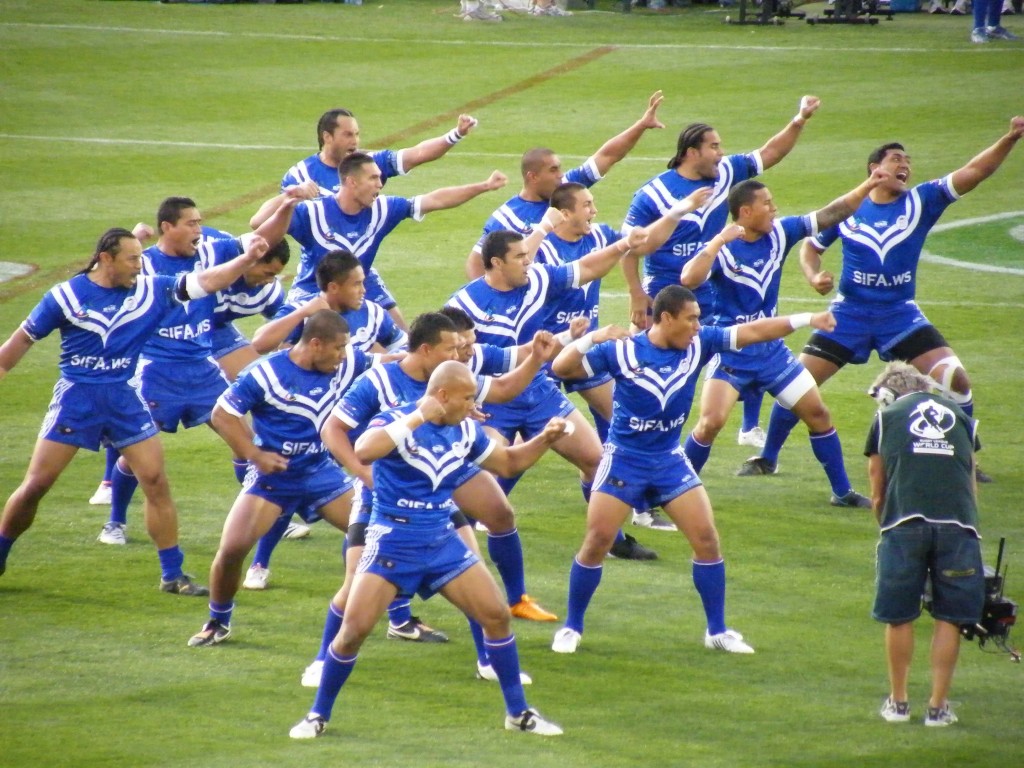 The Samoan war cry is a highlight of any international fixture.

The contentious burnout debate – which I railed against in this article – being peddled by Kangaroos players, NRL coaches and the vast majority of Australian journalists will inevitably work against nations like Samoa. Australia does not currently have any post-season internationals scheduled for 2015, preferring to give their worn-out superstars time to recuperate ahead of the 2016 Four Nations (hosted in the UK, with Scotland the fourth qualifier) and 2017 World Cup.

New Zealand now shapes as the crucial partner in Samoa’s ongoing growth. Plans are already afoot for the Kiwis to play Toa Samoa again next season; it would be an enormous boost to their cause if the Four Nations champions negotiate an annual fixture during tournament seasons and possibly a series during non-tournament years, bearing in mind that Samoa will not be participating in the 2016 edition of the Four Nations.

Starved of international matches, England – who host the Kiwis for a three-Test series in 2015 with the Kangaroos sitting the post-season period out – will also surely relish the opportunity to prove themselves against the emerging power.

Logistics, infrastructure and financials will dictate that Samoa hosting a Test is still a long way off, but the ever-increasing and wildly enthusiastic fan-base they have in Australia and New Zealand – as evidenced by their vociferous support in huge numbers during the Four Nations – should be used to their advantage in the short term anyway.

Further success and exposure will assuredly raise the profile of rugby league back in Samoa, invigorating the code at grassroots level. The long-term goal should be to foster junior rugby league in Samoa, with the eventual aim of seeing born-and-bred Samoan players reaching the NRL – and donning the blue and white jumper of Toa Samoa.

The Verdict on Samoan Rugby League

The foundations for significant advancements in Samoan rugby league have been laid via this year’s ‘perfect storm’ – an ultra-talented and committed squad, an excellent coach and support staff, and performances unparalleled in the national side’s history. But how they, and the game in general, take advantage of that progress before the next World Cup will determine whether international rugby league truly has entered a new era, or whether it is yet another false dawn exacerbated by inaction and apathy.